The Belgian Champions will attend the north London side tonight at their home for the 3rd week of Champions League group’s stage. Beside having a bad start of the season, and need of new points, the Gunners could have a difficult task tonight to beat Anderlecht at Constant Vanden Stock Stadium. 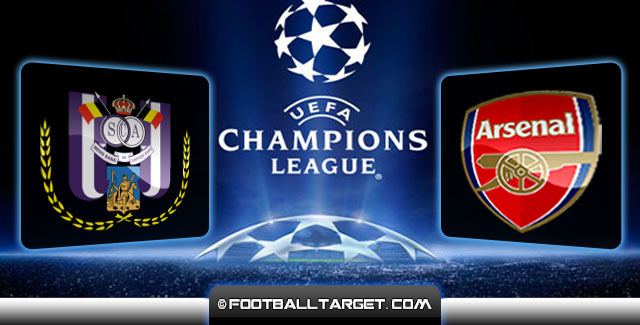 Anderlecht
The Belgian Champions have made a great start of the season by standing first at the Pro League table. They’ve secured 23 points in the first 11 matches , also being unbeatable since 21 April of the last season. Anyway, beside being unbeaten in the last 6 months , they’ve failed to win the last 3 matches in any competition. They lost to Dortmund and failed to win vs Genk and Mechelen by securing only 2 points.

Besnik Hasi will look to finish tradition of finishing 4th at the group stage this season,so they need to get at least one point tonight vs Arsenal

Arsenal
The English team have made an unexpected start of the season so far by winning only 2 games out of 8 at the Premier League but still they wont find it hard to beat Besnik Hasi’s side tonight at Constant Vanden Stock Stadium.

Arsenal stands second on the group D table after beating Galatasaray 4-1 [thanks to a hattrick by Danny Welbeck] and loosing 2-0 vs Borussia Dortmund at Germany.

After the concerning results at the Premier League [loosing vs Chelsea and draw vs Hull City ] , Arsene Wenger admits that his side will bounce back with a big win tonight.

Arsenal will miss their both Goalkeepers tonight [ Szczęsny who is suspended , and Ospina who is injured ] , so Wenger will play Emiliano Martínez, who will make his European debut. The last time we saw the youngster play , was against Reading on that hard-earned 7-5 victory.

Beside the bad news, some players may come back from the injury. Aaron Ramsey will return from a hamstring injury against Hull City, also Jack Wilshere and Walcott will be able to play.