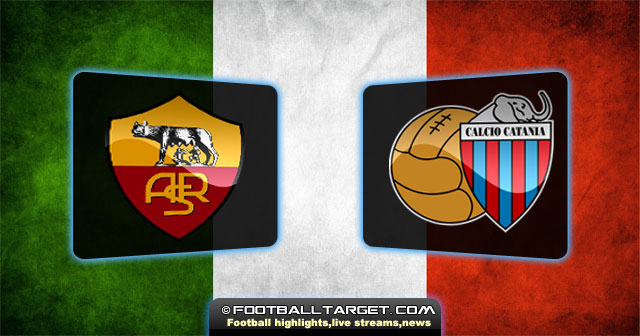 Saturday’s duel of 37th round of Serie A game at the Olimpico of Rome, where seventh places AS Roma against Catania search last chance to reach the European leagues. We should also say that guests from the south of Italy are currently five points behind the Romans and the meeting welcomed completely liberated, which is definitely a great chance for the popular “wolf”, who otherwise in the past five years in the national league with Catania knows only for victories, while their first year’s duel ended a draw.

Precisely because of the positive traditions of the Romans on Saturday night they are thinking just about victory, on which they are waiting for four rounds so it is no surprise that they are behind in the struggle for equity in European competitions. But after two defeats bound, they manage to get two draws, so,still some progress is there, but now only with six points from the remaining two rounds they can hope for something, while every other scenario for them, would mean another failed season.

The chosen of coach Enrique are currently for the sixth Inter lag three and the fifth Lazio four points, while Napoli and Udinese are as well on six points, so only with an amazing combination of fortunate circumstances could eventually overtake them on the table. Of course they are aware of it,in the camp of “wolf” so their main goal will still be trying to “retrieve” the fifth place, which is also an extremely difficult task, but until there is a theoretical chance they will believe in it and they try to accomplish it.

This is why in the duel with Catania we expected Roma offensive from the first minute, especially after worked suspension in the team returns their top scorer Osvaldo, while the young Pjanic is fully recovered and should take his place in midfield. On the other hand, coach Enrique has the most problems in defense, because defenders Juan, Burdisso, Kjaer,Cassetti as well as goalies Stekelenburg and Lobont, are injured , therefore midfielder De Rossi once again will play the defender position, while on the goal will be Curci.

Just like Roma, and Catania team has recently fallen significantly in form, where they in the last five rounds experienced three defeats, and only triumphed over Atalanta at home with away draw in Palermo.
Coach Montella his playing career built at the Olimpico so surely he will have a great desire to prove himself against his former club, especially as his chosen have no particular imperative and can play a completely liberated.

As for the composition, there could eventually be a few changes in the last line,Gender is suspended and injured are Potenza and Capuano, while midfielder Llama and striker Suazo injuries still should not be a too big problem.

Watch this match live from live stream and watch match highlights after the match at Football Target.com