Manchester United players are keen to extend their winning run to 7 games as they face Aston Villa, who haven’t beat the Red Devils since 1995.Last week Manchester United did beat Liverpool 3-0 at Old Trafford thanks to Van Persie, Rooney and Juan Mata goals, on the other side Aston Villa lost the derby against West Bromwich Albion ending a 5 matches unbeaten run. 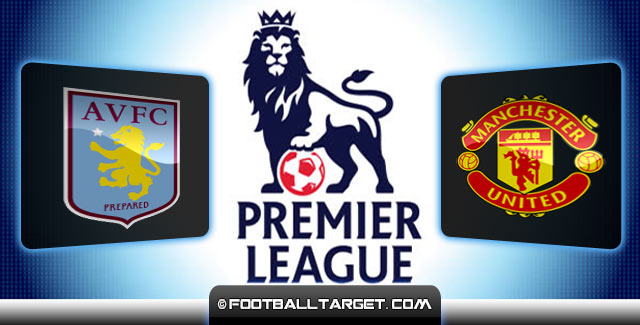 Manchester United
After a poor start, Manchester United seems to have found their good form, as they’ve secured 6 consecutive victories on the Premier League, the last one against their fierce rivals, Liverpool.

It’s expected that Van Gaal will use the same formation that he used against Liverpool. A 3-5-2 with Evans, Carrick and Jones in the defense. Phil Jones returned against Liverpool from a long-term injury. In the defensive part, Marcos Rojo, Chris Smalling, Luke Shaw and Rafael are still unavailable for the Red Devils.

We’re not used to see Rooney in the centre of the midfield like he did against Liverpool, but He seems to have the same duty against Aston Villa. Rooney will play alongside Fellaini in the heart of the midfield, meanwhile Ashley Young and Valencia will play on the wings. About Di Maria, Van Gaal admits that the midfielder has trained with the team but he’s not match fit , so he may start from the bench.

On the attack, once again we’ll see Van Persie making a couple with the youngster Wilson and Juan Mata on their back. Once again, Van Gaal decided to put Falcao on the bench after his poor form. The 28 years old striker has scored only once in 8 games with the Red Devils.

Aston Villa
Aston Villa will face Manchester United with a lot of problems : Injuries and suspensions. Anyway they will hope in Christian Benteke abilities to come out from this match with 1 point at least.

In defence , The Villans will miss their best right back Alan Hutton as he is suspended for picking up his 5th yellow card this season.Alongside Hutton, Philippe Senderos also remains outside as he is suffering a through injury.

Paul Lambert will set up a defence by 3 with Clark, Vlaar and Okore.On the wings Lowton and Cissokho will help in the defensive phase when’s needed.On the midfield, Delph will replace Tom Cleverley who is ineligible to face his parent club.