The first time this season in one of the of European competition met two teams from the same country, and considering how dominant are Spanish Club, it was clear that this will happen to them. It is very easily possible to find in both finals ,Champions League and Europe league teams from Spain, but it is certain that in the final of the European league for sure Spain have at least one representative. It will be better team from this duel for which we can say that it is completely uncertain, because the teams are of equal quality. Two years ago, they also met in the European league and played two draws. This season in Madrid in La Liga they draw ,and in Valencia hosts secure the minimum victory. 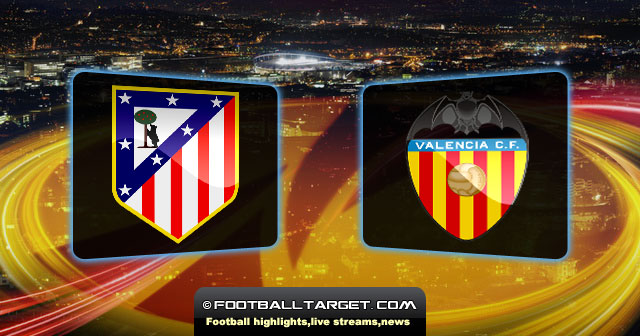 In the ranks of Atletico Madrid rules great atmosphere in front of the first leg semifinal of the European league, and the reason is a victory in Sunday’s small derby against Rayo Vallecano. This is a unpleasant visit and are therefore they are very pleased with these three points with what again revived hopes that they could possibly reach Champions League places, although the struggle for a new appearance in the European league, is a lot more realistic. Key player was again smallish Colombian Falcao who already from the first season playing for Atletico won the hearts of fans and became a new favorite of Vicente Calderon.

It is not easy to get in the Spain La liga,and in the first season to be the third scorer, behind two “Wizards” and score 22 goals so far in the championship, or 30 total. Once again, all eyes will be focused on Falcao in this game where the coach Simeone will not be able to count on a reliable stopper Godin due the suspension, so as usual, Alvaro Dominguez will replace him. On Sunday,Gabi got little rest, but he should play, and remains the only dilemma,whether coach Simeone go with something more offensive lineup and Adrian from the first minute, or more cautious in which Arda Turan will be the starter.

Valencia is in a completely different mood, judging by their last league match on Sunday. “Bats” visit Barcelona,but not Pep Guadiola´s , what would the final score might suggest, but they played against Espanyol. Completely unexpectedly suffered the worst defeat of the season with the final 4-0 score. True, they lost to Barcelona 5-1, but this much harder fell to them, especially after a draw at the Santiago Bernabeu, persuasive victory over Rayo Vallecano and before the first match against Atletico Madrid in Europe league semi-finals. Coach Emery hasn’t sent the first team on the field, but this he is doing throughout the whole season, trying to deploy forces for the grueling pace of play, not even that fact is an excuse.

After all, in relation to the match against Rayo Vallecano, only Parejo replaced Feghouli , while everything else was the same. The big problem is the injury of their striker Soldado who wanted to play on Sunday, but he was apparently kept just for this match. For Banega a long season is over long time ago, and some players were rested on the bench. Emery tried in the second half against Espanyol with Feghouli and Aduriz, and returners Canales to change something in the game, but it did not work.

In Madrid recently they played a great game against Real Madrid,and they hope so to do the same against Atletico, so Emery will not experiment. The right sideback Barragan can not play because due the suspension, which also creates problems, because Miguel and Bruno are not completely ready.Ricardo Costa will jump in,and Victor Ruiz should be back on the stopper, Soldado in the attack, along with the usual goalie exchange because Diego Alves defends in Europe and Guaita in La liga.

Prediction : Between these two teams they are no secrets, they know each other very well, so its to expect the more cautious approach of them. Hosts because conceded goal quite move them away from the finals, and yet the visitors or Valencia hopes to get good result from the first leg match and decide a winner on home ground. We predict so the match with few goals, after theirs last league matches ended without goals.Under 3 goals,and Falcao to score.