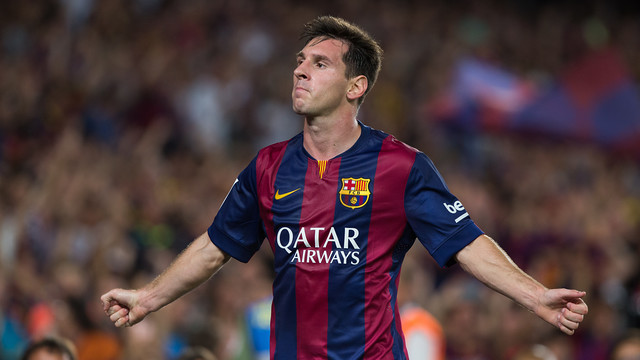 With recent injuries to young Brazilian midfielder Rafinha, playmaker in chief Lionel Messi, and now midfield maestro Andres Iniesta, Luis Enrique’s squad is getting down to the bare bones.

The club’s decision to allow Pedro to leave in search of more playing time at Chelsea is now looking like a poor footballing decision that was clouded by sentiment. With new signing Arda Turan not eligible to play until January, due to a transfer ban, I look at those who could use the next few weeks to follow in the footsteps of Messi, Iniesta, et al, and manage to move on from the world’s most famous football factory, La Masia, and stake their claim for a regular place in the FC Barcelona first team.

The player most likely to fill the boots of Lionel Messi in the coming weeks is Sandro Ramirez, who got the nod in attack against Bayer Leverkusen midweek. Sandro, 20 years old, joined Barca’s youth set up aged 14, and made his debut for the first team five years later, coming off the bench to score a debut winner against Villarreal in La Liga last August. He is not the stereotypical Barcelona attacker; Sandro is a quick and powerful orthodox number 9, with a direct running style, and is always willing to shoot from range at every opportunity. This direct style, which would have been less favoured among previous Blaugrana coaches, could be exactly what gives him the chance to shine under Enrique, who has tried to make Barcelona more multi-faceted since taking  over the reins. Sandro has four goals in 17 appearances so far for Barcelona.

Sandro’s main competition for the third attacking slot alongside Neymar and Luis Suarez is Munir El Haddadi, also 20. Born in Spain to Moroccan parents, Munir joined to Barcelona’s youth set up in 2011 aged 16, after previously being at Atletico Madrid. Unlike Sandro, Munir’s style is much more akin to that of a Lionel Messi or Neymar. He has all the skills and flicks, great pace, and often likes to drop deep to pick the ball up in space before attacking the defence. This would make him seem like a more natural replacement in the Barcelona attacking triumvirate, but despite making his debut a week earlier than Sandro, and receiving more media fanfare, he has yet to kick on, and has only one goal to his name in 13 senior appearances.

The competition for the third midfield position alongside Busquets and Rakitic has a clear frontrunner, providing that Enrique wants to keep Mascherano in his usual central defensive berth. In pole position is Sergi Roberto, who made his debut for the full Barcelona side way back in November 2010, almost five years ago. Now 23, this season is a real make or break campaign for Roberto’s Barcelona aspirations, having made 27 appearances in 2013/14 and 18 appearances in 2014/5. A midfielder in the typical Barcelona style, with good feet and an eye for a pass, he appears to be appreciated by his manager for his industry as much as his technical qualities, and has filled in at right back at times this term. Roberto needs to find the ability to dictate the tempo of a game, and demand the ball off his peers, and the next few weeks could well be the defining period of the young Spaniard’s career.

Next in line to Roberto is yet another attempted Xavi clone, Sergi Samper, current vice-captain of Barcelona B. Samper has the same qualities, and haircut, as Sergi Roberto, but at only 20 years old has considerably more time on his side. He has yet to appear for the senior side in La Liga, but started at the Camp Nou in the Champions League against APOEL of Cyprus. He has also appeared three times in the Copa del Rey for the full team. Arsenal manager, Arsene Wenger, is said to be a keen admirer of the precocious midfielder, and was rumoured to be weighing up a move for the young Spaniard in the last transfer window.

Samper’s B team compatriot, and fellow midfielder, Gerard Gumbau, will be hoping to add to his two La Liga appearances so far this season. 20 year old Gumbau made his senior debut in January, starting in a 4-0 cup victory against Elche. Gumbau has a destructive element to his role in the middle of the park, and is more comparable to Sergio Busquets than a Xavi or Iniesta. He has no lack of talent however, as those who witnessed his wonderfully improvised, back heeled, half volleyed goal for Barcelona B against Alcorcon can confirm.

So, for now, the future looks bright for these five young Spanish footballers; playing for the first team of a club they have been nurtured at since they were boys, a club they surely have great affection for. Will they achieve the ultimate goal and become the next Iniesta, Busquets, or Messi? Will they wind up plying their trade in another top European league like Bojan Krkic? Or end up further afield, like Giovani dos Santos, now at LA Galaxy?

Only time will tell…