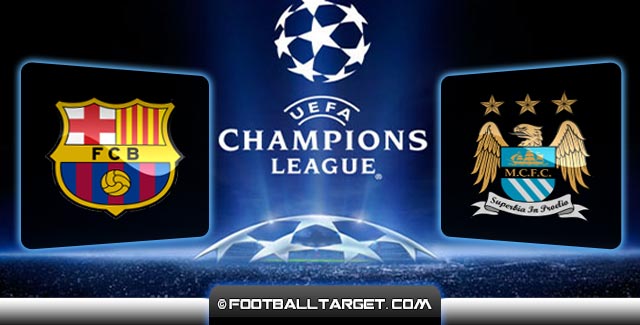 A clash between the Catalans giant, Barcelona FC and the reigning Premier league Champion, Manchester City, by opinion of many should have been one of the most interesting encounters of the Champions league knockout stages, but, Barcelona in the first leg match at the Etihad celebrated with 2:1, and only a miracle should happen at the Camp Nou in order for the English side to pass trough. The fact that English clubs have celebrated only once in 28 matches at the Camp Nou, only confirms how big task, Manchester City this Wednesday will face.

Louis Enrique’s side already in the first leg match in Manchester have shown that they are better team than Man City. A 2-1 win, knowing that Lionel Messi in the last minutes of injury time missed and a penalty, suggest that Barcelona already now are one step closer to the quarter-finals. In Copa del Rey, Barcelona enrolled two wins over Villarreal and will face Athletic Bilbao in May in the final.

After three conscutive wins in Spanish La Liga, Barcelona jumped to the first place of La Liga, and for sure in much better form awaits the clash with the Citizens. Certainly, result from the first leg match is going in favour for the Catalans side, knowing that this weekend Messi & company await the biggest Spanish derby, El Clasico. The stakes are high in both competition, so despite 2-1 result from the first game, Luis Enrique won’t rest some players and will send the best to the pitch, but his tactic could be something more “relaxed”.

Barcelona coach Luis Enrique and midfielder Andres Iniesta look ahead to the visit of Manchester City in the second leg of their UEFA Champions League last 16 tie.

For the clash with Man City, Enrique can’t count on injured duo Vermaelen & Busquets, while Martin Montoya sustained a fractured cheekbone in a 2-0 win at Eibar on Saturday.

Unlike Barcelona, Manchester City this rematch knockout stages of the Champions League at the Nou Camp just like last year welcomes in deficit, which now is “only” one goal, thanks primarily to the English goalkeeper Hart who in injury time managed to save the penalty of Messi.

But even before that, it was seen that the Catalans are currently looking a lot more organized and serious team of the “Citizens” who, otherwise the first lef match ended without Clichy who was sent off, so this final result at the end may even be somewhat satisfactory for them.

Coach Manuel Pellegrini and midfielder Yaya Tour assess Manchester City’s task as they attempt to overturn a 2-1 deficit in the second leg of their Champions League last 16 tie against Barcelona at the Nou Camp.

However, they are still very far from the quarter-finals, but as Man City coach Pellegrini said, as long as there’s even a chance we will not give up and therefore he announced the much more attacking approach, especially since lately in the Premier league Citizens remain very obliged to their fans.

From the last three rounds, Pellegrini’s side twice lost the game, the last one last weekend against Burnley 1-0, and now they are trailing bix six points behind the leading team, Chelsea FC, who were knocked from the Champions league by the French side, PSG. Third Man Utd and fourth Arsenal now came close to one, two points, while Liverpool thanks to recent good results even more complicated the fight for the Champions league places.

“It is important to be there in the later rounds but you can’t think that not being there is a disaster.”

“You can talk about tactics and technique but if you go a man down against Barcelona, you’re put in a terrible position,” continued the Chilean coach. “It is not a disgrace to get knocked out by them.

“Their squad, if it is not the best in the world, it is the second best. No other team can put together Leo Messi, Neymar and Luis Suarez but I want to play them with 11 and if they knock us out then let that be because they were better than us.”

Pellegrini for this clash can not count on suspended defender, Clichy.

The question remains, with two from three Premier league clubs already out, Chelsea and Arsenal, can Manchester City produce a miracle in Spain and remain the only Premier league side in Champions league ?