After 1-0 defeat to Real Sociedad a bad mood hit the Catalans locker-room, more over tensions on relation Enrique vs Messi raised up. Still a high 5-0 win over Elche in Copa del Rey calmed a little all this, until Sunday’s clash against Diego Simeone’s Atletico Madrid. Defeat could raise a new alarm at Barcelona.

Last year these two clubs have met four times and even three times they played a draw while Atletico Madrid celebrated once. This only shows that Diego Simeone’s tactic and team does not fit very well to Barcelona.

Situation on the table does not allow any of these two side to slip tonight as Real Madrid are on the top 4 points clear, while Barcelona and Atletico Madrid are on 2nd/3rd with the same number of points, 38.

And while Barca trashed Elche a much more important win for morale achieved Atletico Madrid who with 2-0 beat Real Madrid in the same competition. 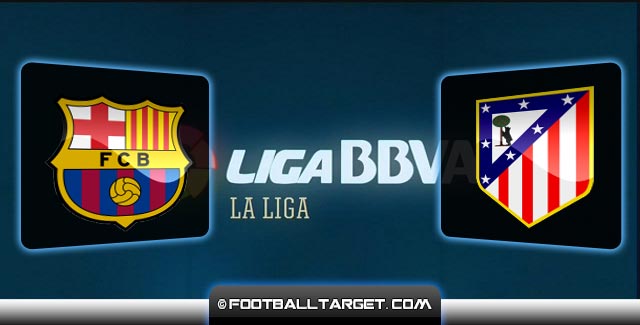 FC Barcelona trained ahead of entertaining Spanish Primera League title rivals Atletico Madrid on Sunday as they look to put a week of controversy behind them.

Barcelona president Josup Maria Bartomeu again insisted on Friday (9th January) that rumours of tension between Lionel Messi and manager Luis Enrique were “totally false” and denied that Messi had asked him to sack Enrique.

Atletico Madrid head coach Diego Simeone says Barcelona “still have the characteristics that make them one of the best teams in the world”, as his side prepare to take on Luis Enrique’s men.