Barcelona FC welcome another Catalan club at the Camp Nou, Espanyol, hoping to enter new three points on easy way. The recent encounters between these two teams is on Barca’s side as Espanyol in the last five years managed to take only one point from the Camp Nou, while this season on tour Espanyol grabbed only two points. 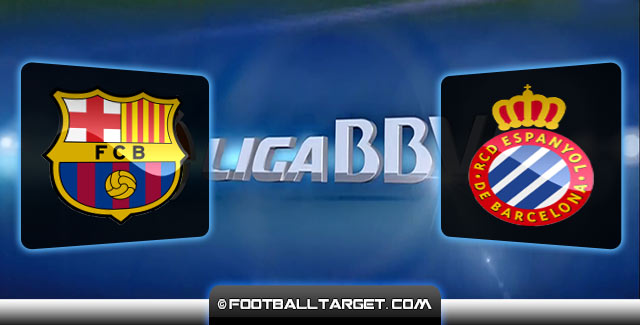 Barcelona last week as a guest passed a very hard task at the Mestalla. Valencia were equal to Barca all ninety minutes, but in injury appeared the Spaniard Sergio Busquets and scored a goal for all three points which left Blaugrana in race for Real Madrid. Having completed the formality in Copa del Rey, Barca awaits a derby match against Espanyol, which, judging by recent years, should be an easy task for Messi, Neymar and company.

In the last five years Espanyol only once managed to drawn the game against Barca, while all other matches ended up with a win of Barca.

– Derby’s are always special matches, especially for fans who create a phenomenal atmosphere. Given our recent results we await match with Espanyol calmly and with optimism, although we always have hard time to play against Espanyol.

Our opponent this season is playing highly variable, but when Espanyol’s “strongest weapon”, defensive transition and counterattack are working, they can be very dangerous – said Barca boss, Luis Enrique.

Problems with absences Luis Enrique should have, not counting Vermaelen who is from the beginning of the season struggling with injuries. Belgian, according to some announcements could even now be in the team, but it is very questionable.

Espanyol this season shows two faces, the good one when playing at their Estadi Cornellà-El Prat, and one desperate on tour where they won only two points.

Fortunately for the blue and white side in the last round at home against Levante they took all three points, but because of their bad away form Espanyol chances this Sunday are not big.

Espanyol goalkeeper Kiko Casilla is still optimistic:
– The victory away against Barcelona echoed would like a bomb, and that would be the best thing for our team. Realistically we have a good chance and we are aware of difficulty of the task, but it is about football and that anything is possible.

Barca has one of the strongest attacks in the world, but to me the names of Neymar, Messi and Luis Suarez not be afraid only motivation. Barca is strong, but like every other team has its weaknesses which we will try to use.

During the week of problems with minor injuries had Salva Sevilla midfielder and striker Cristian Stuani, but the latest information show that both would be ready for the derby.

– The victory against Barcelona would be really a big thing, and that would be the best thing for our team. Realistically we dont have a good chance and we are aware of difficulty of the task, but this is football, where anything is possible.

Barca has one of the strongest attacks in the world, but to me the names of Neymar, Messi and Luis Suarez are not the names to be afraid, only motivated with them. Barca is strong, but like every other team Enrique’s side has weaknesses which we will try to use.