There are few of people who have seen before competition this finals, Chelsea and Bayern definitely were not the first favorites.

Bayern Munchen the delight to win the title of the “old continent” has experienced four times from eight attempts. Although someone’s would expect that these two clubs met more often, it was not a case with this two clubs. These clubs met only in the Champions League quarterfinals in 2005. year, when Chelsea won 4-2 in London, and Bayern Munich won in the return with 3-2 which was not enough for them (Read Bayern – Chelsea History). 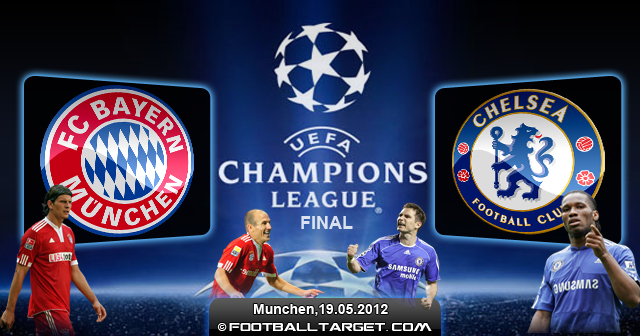 Even three goalscorer from these meetings will have the opportunity to score again after 7 years the net´s of the same opponent, Lampard in London scored 2 goal,Drogba one,while in the second leg both of them have scored one more.

In the team of Bayern, scorer from London Schweinsteiger will have the opportunity to repeat it,in the finals. It is not a great wisdom to say that despite the strength of the English Chelsea, bigger chances of winning a trophy has Bayern, who at their Allianz Arena, which the the scene of this year’s finals, are losing very rare.

The grand final of the Champions League this season brought plenty of excitement, nice moves, goals, and surprises. Some, like the elimination of Manchester United have occurred even in the group stage, while in the semi final it was created just from these two clubs that almost nobody saw it as finalists.

Many have desired and expected the new “El Clasico” ,but at the end none of the Spanish giants will see the finals. Bayern eliminate Real Madrid, which is still less surprising than what Chelsea kick-out Barcelona.
Both are of course deservedly here and this will be the third mutual encounter for them in the Champions League.

For Bayern is perhaps the most important at this point that on the other side of the field is not Borussia Dortmund. Two domestic trophies escaped to Bavarians, and the only reason are “Millionaires” from Dortmund who have beated them twice in the championship and defend the trophy.

Last Saturday they read the real lesson to Bavarians in the final of the DFB-Pokal in Berlin, defeating them with 5:2. (Recap,Highlights)It’s hard to remember of match in which Bavarians received five goals, but it just happened to them in the DFB-Pokal finals and before the big Champions League final,which certainly must have left some mark on their team.

They did not hope to that, after in the league finals in which the coach Heynckes even combined composition, played very well. Number of goals received clearly indicates in which part of the team there are some problems, and the defense played in the complete composition.

Concerns have been even greater if it is known that in this final defender Badstuber due to card will miss this game, so Heynckes will have to improvise now, a bit sensitive part of the team anyway.

Tymoshchuk could replace him, but this is not the only problem, because left-sideback Alaba will miss this game to, so probably Lahm will replace him on that position, and Rafinha will start the game on the right side. Luiz Gustavo is also not eligible to play due to cards, so it is certain that the last midfielder will be Kroos and T.Muller will play in midfield. All hopes they still lay in the bright part of the team, the attacking ones.

Chelsea footballers for two reasons in this finale comes with greater confidence than an opponent. The first is that they eliminated Barcelona in the semifinals, which is of course a huge thing for the atmosphere within the team.

The second is that unlike Bayern Munich, Chelsea players did not miss a chance in the FA Cup, where they beat Liverpool, which means that they with one already won trophy come to this final. In addition, this final was played earlier than the German Cup final, so they had more time to recover and to prepare themselves for this big match.

They played after FA Cup two Premier league matches that have not decided anything, so the coach Di Matteo,logically send to field combined team. More specifically, those who will not play in the finals of the Champions league due to card, played in these matches,and that´s even four players.

In defense the problems are even greater, because Terry and Ivanovic can not play, and to the injuries Cahill and David Luiz are complaining. Probably will still be ready for this match, given that other solutions are almost nonexistent.

The question is how such “fragile” can play ,is a big concern for Di Mateo who reborn Chelsea. Worth mentioning is an interesting fact that all the goals in the last two championship rounds and one in the FA Cup scored players who do not have the right to participate in this match.

There is a lot motives for both teams. Bayern Munich is host, which creates them extra pressure, and the fact that they did not win anything this season. Chelsea has a trophy, but in case of failure they will remain without the Champions League next season. Both teams were weakened, although it must be said that the problems are greater in Chelsea. When it all boils down, the Bavarians are still closer to the title.So,Bayern to win the Champions league.

Will Chelsea finally grab the Champions league title, or will Bayern Munich once again lift the trophy? Watch Bayern – Chelsea Live from Live streams for free.
Watch match highlights and full match videos from the Champions League final, as soon as the match finishing at Footballtarget.com