Bayern Munich their route to the Champions league final,start furious like the another finalist,Chelsea.However,unlike Chelsea,Bavarians remain on the top of Champions league group A from first to the last match.Bavarians played in the toughest group also called “group of dead” 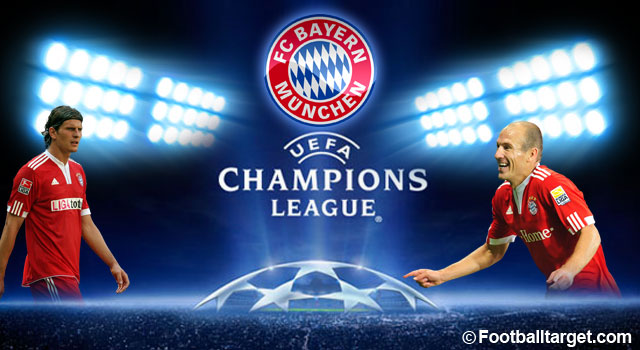 Already in the first match,an away one against Villarreal, Bavarians shown their intentions and their strength,and with 0-2 result won the match in what they dominated from the first minute.Scorers for Bayern were in the 7th minute T.Kroos, and the final score set in the 76th minute Rafinha.

Second match the derby one,Bayern host this year Premier league champions,Manchester City and won with the same result as against Villarreal 2-0.More than just an impressive result was total domination of the Bavarian team in this match.At Allianz Arena Bayern solve all in the first half when Mario Gomez found the net in the 38th minute and in the 45th minute.With this win Bayern was on the great strike having no less than 10 straight victories in the official games without conceding a goal.

Bayern perfect run in the third round Italian Napoli stopped.Altough Bayern took the lead in the 2nd minute,and was the better team,their run of 12 straight victories,hit the dead-end when H.Badstuber in the 39th minute scored an own goal.Bayern was better team in this match,and the victory to Bavarians could get M.Gomez in the 48th minute ,but he failed to convert penalty in goal.Despite this draw,Bavarians stayed at the top of group.

In the second half both teams remained with one less player due to second yellow card. First Zuniga at Napoli in the 70th was sent off,and then Badstuber in the 77th minute of the match for a foul,from which Fernandez once again scored and set the final score 3-2.

In the fifth round Bayern secured the first spot and the placement to the next stage of the Champions league.Playing at home Bayern once again totally outplayed Spanish Villarreal,this time with 3-1.Spanish club has not any real chances for the next stage,as in this time,they already hit hard the bottom of group A.Scorers for Bayern Munich were Ribery (3,69) and Gomez in the 24th, while the only goal for Villarreal scored Guzman in the 50-minute.

Last match of the group A,Bayern played in Manchester,where he arrived with mixed team and first lineup,knowing despite the result here,he will be still on the top of the group.Man City need a win here,but also,to reach the next stage,Villarreal needed to took home at least a point from Italian Napoli.Citizens beated Bayern with goals of David Silva,and Yaya Toure and was the better team against Bayern mixed team,but,Napoli managed to beat Villarreal and so joined to Bavarians in the passage to the next stage of Champions league.

In the round of 16,Bavarians drew Swiss Basel,who previously in the group stage knocked last year finalist Man Utd.While playing in the group stage,Bayern was on the top of Bundesliga,things started to change for them.First Basel shocked them with 1-0 victory.Bayern had their chances here,but when they manage to break Basel´s defence there was Yann Sommer,Basel goalkeeper who stopped all their chances.And then at the end of the match,in 89-minute Valentin Stocker found the net and set the final score of the first match 1-0.

The second match was something different.Bayern Munich at the Allianz Arena with a 7-0 demolished Basel and so secure their place in the quarterfinals of the Champions League. Brilliant in this match were Ribery, Robben and Mario Gomez.

Already on the half-time,Bayern had a 3-0 lead with goals of 1:0 (11.) A.Robben, 2:0 (42.) T.Muller, 3:0 (44.).In the second half Bayern did not get relaxed,they continue the match with the same pace as in the first half.Ribery and Gomez were brilliant and exactly Mario Gomez scored three more goals,while in the 81st minute A.Robben scored his second goal on the match and set the final score 7-0.(Full match highlights)

Quarter-final match with French Marseille ,Bayern passed relatively easy.Already in the first match at Stade Vélodrome Bayern shown their intentions and who is the better team.Despite Marseille had their chances in the first match, simply Bavarians were better team and with goals of Mario Gomez in the 44-minute and Robben in the 69-minute Bayern sealed a comfortable win and brought a big 2-0 advantage to Munich.(Full match highlights)

Second match ,same result.Jupp Heynckes allowed some relaxation in the team as they got 2-0 advantage from the first match and Marseille in the mean time was struggling in the Ligue 1,like in the Champions league.So Jupp Heynckes mixed a little the first team and from the beginning Croatian striker Ivica Olic gets his chance.Exactly Ivica Olic was the match player,and with two goals he finished the story here.Marseille played a better match then in France,but it wasnt enough for them to change things.(Recap)

Mourinho´s Real Madrid stars waited Bayern Munich in the semi-finals of Champions league.Bayern first match played at their Allianz Arena and won the match from 90th-minute winner of Mario Gomez.

Duel of these giants could not even go on a lower speed than the fifth – and Bayern Munich and Real from the first seconds with the “open guard” present a spectacular encounter.Real Madrid was a favourite in these two matches,and even in the first match they come to win.However,Bayern footballers played amazing and took the lead when in 17 minutes Ribéry slammed with a low shot and scored for 1-0.Real Madrid footballers started to press more,but every time they found themselves in the chance to score,there was Bayern goalkeeper Manuel Neuer who deny them.

The second half started without new faces on the pitch,and in the second half as well these giants have not spared themselves.In 53rd minute Real Madrid with some luck manage to score and to level result.

Benzema has pulled counter-attack, gave the ball to the left for Ronaldo, whose shot Neuer rejected. The ball comes to Benzema who goes to the right and returns the ball to the second goal posts where Ronaldo´s shot founds Ozil legs and the ball bounces into the net.

The combination Lahm – Gomez proved to be the winners one here.In the 90th minute Gomez convert Lahm delivery and Bayern shocked Mourinho and Real Madrid as well made a step closer to Champions league home final.

When all believed that Real Madrid will easily beat Bayern and secure the finals,Bayern Munich done incredible things.Maybe the biggest reason why they reach the final match is the fact that in this second match with Real Madrid despite having advantage from the first game,they did not come to defend themselves.Bot teams start the game once more attractive and opened.

Plenty of chances had bot teams,and Real Madrid manage to win,but it was obvious that El Clasico exhausted Madrid players and the more time has passed the more control of the game on the midfield had Bavarians. (Full match highlights Bayern  Champions league)

In a extraordinary match, Cristiano Ronaldo in 6th and in the 14th minute scored and brought advantage to home team of 2-0.Bayern has not surrender and that paid off to them when in the 27th minute ex Real player A.Robben found the net and level the game at 2-1 (agg 3-3).Despite having a lot of chances in the second half,the match ended 2-1 and teams went to extra time in which the tempo of the game has fallen.

Real had some chances but nothing serious and the match goes to penalty shootout lottery drama where in the end Bayern Munich was better and so reach the Champions league final.

Bavarians Bayern Munchen on their route to the Champions league final match with Chelsea was powerful and from the start went furious.Group stage Bavarians passed easily despite having one of the toughest groups.Round of 16 and match with Basel maybe showed how serious they are to play this year finale at home.Crashing Swiss Basel with 7-0 in second match gave them wings they can do a lot this year in the elite club competitions.

Semi-finals match with French Marseille was just one game to do for them and the final score from both games 4-0 proves that.On their way to the finals,there was only one obstacle for them left,and it was the big one.Mourinho´s Real Madrid carried with superb Cristiano Ronaldo.However,Bayern shown that their collective is bigger than Real Madrid´s individual strength and with penalty lottery where their goalkepper Neur was brilliant they reach the finals.

Chelsea on their way to the final shown their killer counter-attacks,but on the other hand,Bayern reach the finals trough dominating the game and lots of goals.Axle Robben-Ribery-Gomez is something that Chelsea players will have to take extra care off it, if they want to raise the Champions league trophy in Munchen.