This Wednesday are playing the remaining two games of 34th rounds of English Premier League, and except Chelsea – Newcastle then the second one their forces will weigh a host that takes a great battle for survival in the company of  the best and the guests who have not yet given up of their placement in the Champions League. 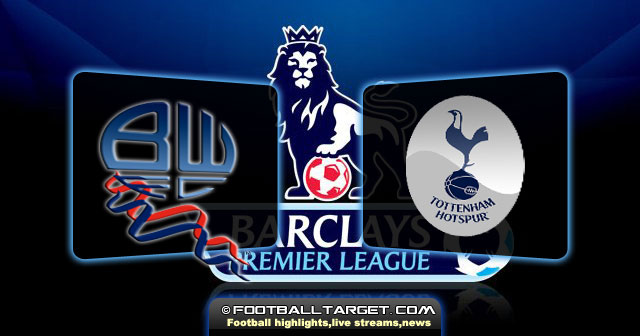 The Spurs are currently in fourth place, and have the same number of points as Newcastle, while just below them are Chelsea with one point less, while Wanderers are between the 17th division and 18th position, and only because of poorer goal-difference they are located behind the QPR’s. Otherwise, in the duels of these teams for a long time there was no guests victory.

This last fact may provide the greatest hope for the Bolton that on Wednesday at home might come to the full prey, and probably would not be too unhappy with a draw, because with it after the long time they would jump over QPR’s. Certainly none of these options is not impossible,especially as the chosen ones of coach Kean much improved form, where they in the last three rounds won five points, four of them away.

Specifically, first they eight days ago in Birmingham celebrated with 2:1 against Aston Villa and last weekend they show a very brave game  in the Sunderland, which  eventually paid off to them, because they secure a draw in the match with a few turns, and so get an extremely important point in the struggle for survival.

Otherwise, Davies scored the first goal for Bolton in that game, so it is quite certain that he will again lead the attack in his team’s duel with the Tottenham Spurs, while his partner this time is likely to be young N’Gog.Also, the rest of the team should be the same as in the duel with Sunderland, especially since still out of the team due to injuries are defenders Gardner and Mears ,and midfielders Holden, Lee and Muamba.

Unlike Bolton, Spurs last weekend celebrated in the home match with Blackburn, thereby finally ended a series of bad results, and again returned to the fourth place at the table. The chosen ones of  coach Redknapp before this match have suffered two defeats and one draw, while in the FA Cup semi-finals suffered a real loss of face, with  even the 5-1 defeat by city rivals Chelsea.

Therefore, they triumph over Rovers was  of great importance, both because of the points, and because the necessary confidence before the league finals, in which they  certainly expect to retain the fourth place and so after a year of pause, once again play in the Champions League.

But to achieve this and, very likely they will have to celebrate in all three remaining matches, therefore the experienced Redknapp said that at the Reebok Stadium he will sent the strongest team at the  disposal,in which would not compete from the previously injured defenders Dawson and Assou-Ekotto ,midfielders Niko Kranjcar and Huddleston

Besides them, we must point out that defenders King , midfielders Parker and Lennon,are not fully ready yet so that this time their formation could experience some changes, especially in offensive part, where in addition to Adebayor and van der Vaart is expecting  and recovered Defoe.

Prediction : Given that both teams desperately needed points in order to fight for survival, and for placement in the Champions League, here somehow the most realistic to expect is a completely open competition, where should certainly be a lot of goals.Over 2,5 goals