This Saturday at the English Wembley, a long-awaited Champions league Final will be played, between two biggest German clubs,and rivals, Bayern Munich and Borussia Dortmund. 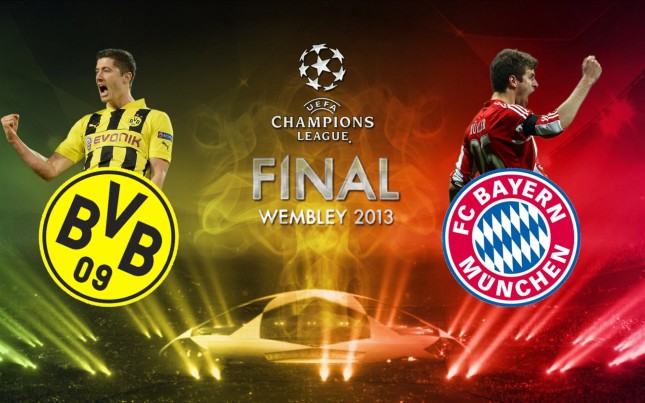 Given what Borussia and Bayern have shown this season in the Champions League, realistically both of them have deserved to reach this final, and in particular we should recall the semi-finals where these teams eliminated the Spanish giants Real Madrid and Barcelona.There’s no big mystery between Borussia and Bayern as this season they already have met four times.

Since the Bavaraian club, Bayern Munich has already won domestic league, Jurgen Klopp’s team will be eager for vengeance and try to lift the trophy of the best team in Europe.

After two seasons of Dortmund˙s domination , Bayern this season is more successful, but it can not be said and more dominant side. Twice the Bavarians celebrated this season, in the Super Cup and in the Cup, both times playing at home, while in both league matches it was 1:1. This is the first time these two teams will play in a European competition.

Bayern this season is playing very efficient football in the Champions League and they road to the Champions league final was a really impressive. In 12 played matches Bayern has won 29 points, and it is the most efficient team in the elite club competition in Europe. Bavarians on their way to Cl´s final have suffered two defeats, recorded one draw and nine times they celebrated a victory.

At Wembley for the last time on the bench of Bayern will sit the 68-year-old Jupp Heynckes who with the Bavarians this season has won domestic title, and could take until the end of the season the Champions League trophy and the German Cup.

On the other hand , Borussia their first loss in CL recorded in the second leg match of the Champions League semi-final against Real Madrid at the Santiago Bernabeu. Jurgen Klopp´s team so far have scored 23 goals, enrolled seven wins, four times they drew, and as we already mentioned they have recorded only one defeat.

Both teams are playing very good football and preffering a technical style of football. The middle on both teams is very strong , while the attacks are led by two giants. On one side is Lewandowski, with Mario Mandzukic on another where the main focus will be.

Bayern Munich camp is convinced that for the fifth time they will win the Champions League title. This proves the fact that they reserve a one hotel in London to celebrate after the match.

Bayern’s last time on the throne of Europe was in 2001. year, and Bavarians were very close last season, when they failed at their stadium in the final to knock Chelsea and take this trophy.

Dortmund has won the Champions League title ‘only’ once,and it was back in the 1996/97 , so surely Lewandowski and team will want to repeat that success.

Team news
For Borussia only Mario Gotze will miss the final due to a thigh injury,while for Bayern only Toni Kroos will be out for this match.

Match Prediction : Bookies see here Bayern Munich as a huge favourite to take the trophy.Who can judge them considering Bayern Munich perfomance this season.Still,this is Final match, and this season Bayern smashed everyone in front of them,except Borussia.So we decided to go here with two options, Both teams to score, and Borussia Dortmund AH +1,5.

Match Highlights & Full Match Replay will be available after the match.