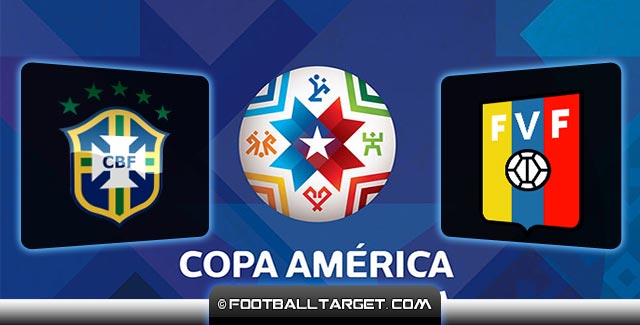 In the last round of Group C, Brazil without their star Neymar who is suspended is set to play against Venezuela, looking for a win. Both teams have a chance of securing the next stage with a draw, but in that case many things will depend on Uruguay v Peru match.

On the other side a defender Fernando Amorebieta is suspended for Venezuela in a 1-0 defeat vs Peru. Brazil lost the first game since the World Cup 2014 under their new boss Dunga, and the Selecao still did not sealed their progress. A possible defeat would be a huge upset for many stars in Dunga’s team as Brazil are one of the Copa America 2015 favourites.

– Brazil v Venezuela is available worldwide, including the UK except for in the America

– Make a minimum 5 euro deposit get a bonus of another 5, and you dont have to spend it, ever.

Despite Neymar’s absence, Dunga is trying to calm down the whole thing.

– Everything depends on only us, and the ideal situation would be to beat Venezuela.

– I think we are creating good chances and that we are playing fine, so we just need to improve our finish and there would not be any problems.

– I try to be calm and to not bother with what’s happening off the pitch.

– Of course that i would wish that Neymar is with us, but he’s gone, and I believe to the rest of the team.

On the other side Venezuela boss Noel Sanvicente believes that his team have what it takes to beat the Selecao.

– We knew that this group was quite difficult, but we must move fast from the defeat because it is Brazil.

– We’re going with a defeat, but we have the match against a favourite and that motivates us.

– We know what Brazil are, and without Neymar, we have the team to win.