The Quarter finals of FIFA WOrld Cup 2014 are coming. Brazil will face Colombia tonight at Estádio Castelão, Fortaleza. Both teams comes from different matches, different form. Brazil luckily beaten Chile 3-2 on penalties in the first knock out stage. Meanwhile Colombia put in a stunning performance vs Uruguay , where they easily won 2-0 thanks to James Rodrigues goals. 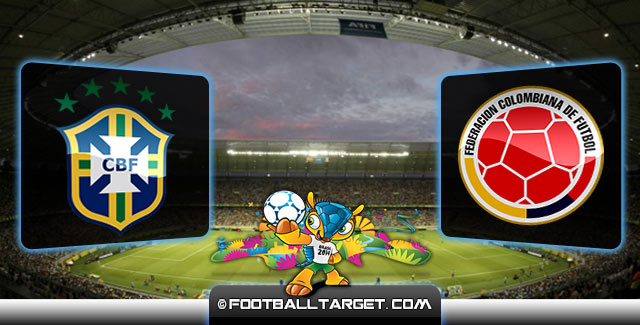 Brazil
Brazil did not put an impressive performance in this World Cup like they did in the Confederation Cup last year. This Brazil has lack of creativity , team play and lack of physical condition.

Besides the second half vs Cameroon, Brazil failed to impress or dominate the opposition. Brazil was very lucky to qualify vs Chile after winning on penalties 3-2. Their goalkeeper , Cesar made 2 important saves and the last penalty hit the post.

After that tiring match vs Chile , Brazil players are not expected to be 100% fit. Their key player , Neymar picked up a thigh injury in Brazil vs Chile match, and he will be in doubt for this game. In defense there are not expected to be any changes, with Thiago Silva, David Luiz at the centre , Dani Alves at the right back and Marcelo at the left. In midfield Fernandinho is more favourite to start than Paulinho, given to his technical abilities. Meanwhile in attack Willian is going to start instead of Hulk.

Colombia
Colombia arrived in Quarter finals as one of the best of the tournament so far. The South Americans won 4 matches so far, being the only team to do so. So far they scored 11 goals and conceded only 2. Five of them were scored by Monaco starlet, James Rodriguez who is in the lead of the Top Goalscorers.

Jose Pekerman has no injuries concerns or suspensions. They seems to be more fit than Brazil , since they managed to finish the game vs Uruguay in 90minutes. Pekerman will rely in his wingers , and of course to their new superstar, James Rodrigues. Cuadrado has been in a good form in the whole season with Fiorentina , and now with Colombia too. He’s the assistman of the tournament ,after giving 4 of them in 4 matches so far.