Brazil vs Germany Preview : Neymar and Silva missing for Selecao

In the World Cup 2014 first quarterfinals match, the hosts Brazil are set to face the European side, Germany, but Scolari’s side will be without their biggest two stars, the striker Neymar due to injury and the team captain, Thiago Silva who is serving suspension. 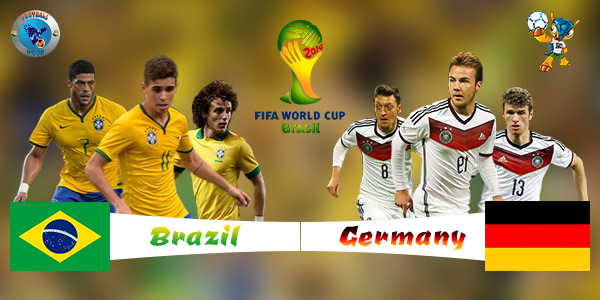 Semifinals which safely can be called as the final before the final, because these two national team selections together have eight world titles. More Successful is Brazil having 5 titles, while the last World Cup champion title, the Selecao have won exactly against the Germans 12 years ago, led by the superb Ronaldo. On the other hand it was the last time the Elf were in the finals.

The last mutual encounter between these two teams was played in 2011., in a friendly match in Stuttgart when the Germans with 3-2 were better than Brazil.

This would be only the second World Cup clash between these two sides, which is interesting because these are two teams that have played the most matches in the World Cup history. This time the Elf will look to take a revenge and knock the World Cup hosts.

“We were at least in the semi-finals at the last four World Cups and this shows that we have a constant game at the highest level,” said the German coach Joachim Löw and added that he has only one wish: “I desperately want to play at Maracana stadium on July 13, Our job here it’s not completed. ”

Brazil are not what they were – Schweinsteiger

Brazil will be weakened by not playing the two major players, the biggest stars Neymar and captain Thiago Silva, but it is not looking forward to Iowa. “Too bad Brazil game without two of the best, you always want to see the best players in action at the World Cup, but I’m sure I can catch up in the right way.”

Brazil will be weakened as their two biggest stars Neymar and captain Thiago Silva, will miss this match, but Low is not happy about it. “It’s Too bad that Brazil will be without two of their best, you always want to see the best players in action at the World Cup, but I’m sure they can find a good replacement for them.”

Löw trust in his intuition

” I’m Incredible sorry for Neymar, he is a great footballer and is really a shame that he will not play, for him, for the team and for the entire country. Hopefully he will recover as soon as possible and start playing again,” said the German strategist, who still has doubts about the starting lineup ahead of the semifinals.

The possibility that Miroslav Klose starts from the first minute it’s hot, where has played Müller, while Mesut Özil who is quite unconvincing in Brazil could be on the bench. “I’ll talk to the players and the rest of the coaching staff, but sometimes I just need to follow my intuition. Eventually, I make the decisions.”

Scolari certainly more than Low regrets a miss of Neymar , and in training the Brazilians tried several variants in which are several possible replacement for the injured star.

According to Brazilian media, the option with Paulinho is mentioned, which is slightly more cautious, with the other options like those with Willian or Bernard, the two players who are stronger in the game forward, and could step in and Ramires.

Instead of Thiago Silva who serves a suspension, Bayern defender Dante is likely to start, especially as he knows the Germans know from Bayern Munich, which is a member of, or from the rest of the Bundesliga. After all, it is pointed out that Dante will translate the German conversations to his teammates.

“Germany has a nice tactic, it is a very good team, very balanced,” we are aware of the dangers in the semifinals said Scolari. But on the way to much desired title Brazilians do not have space for the mistakes.

Match Prediction : Germany to book their ticket to the finals.