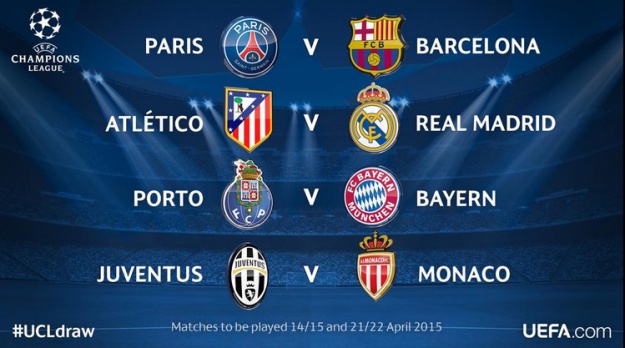 The Champions League quarter finals 2014/15 will see some interesting clashes as the Madrid’s derby seems to be interesting while PSG will try to revenge against Barcelona like they did against Chelsea.

Reaction to the UEFA Champions League quarter-finals draw in Nyon as Real Madrid draw city rivals Atletico and Barcelona find out they will be facing Paris Saint-Germain.

Carlo Ancelotti’s worst nightmare was confirmed on Friday as the draw at Nyon has picked them to face Atletico Madrid for the Champions League Quarter finals. Real Madrid will try to defend the title they hardly earned against Atletico last season in a 4-1 win on extra time.

The first leg will be held on 14 April at Vincente Calderon, where Real Madrid got some bad memories from the last time they faced Atletico over there as they lost 4-0.

Bayern Munchen was drawn against Porto, the team who smashed Basel in the last round.The German side might be happy with the draw as they avoid some big names like Barcelona or Real Madrid. On the other side, Porto will try to make a surprise as the fans hopes are all on Yacine Brahimi’s abilities.

Barcelona was drawn against PSG. Both teams knocked out two English teams, where PSG had a more difficult task as they were able to qualify only after the extra times. On the other side Barca never put in doubt their qualification against Manchester City as they won the first leg away on Etihad Stadium.

One of the biggest surprises of this season, AS Monaco were drawn against Juventus , who knocked out the 2012/13 Champions League finalists, Borussia Dortmund. Monaco survived on the second leg against Arsenal after beating them 3-1 on Emirates Stadium. The Serie A Champions are seen as the favourites of this clash despite they will miss one of their key players, Paul Pogba.