It is difficult to announce this game without not going back three years ago, when Barcelona skipped Chelsea without defeating him.At a meeting in London in the lead role was a Norwegian referee Tom Henning Ovrebo, who failed to award at least 3 penalties for London´s Chelsea… 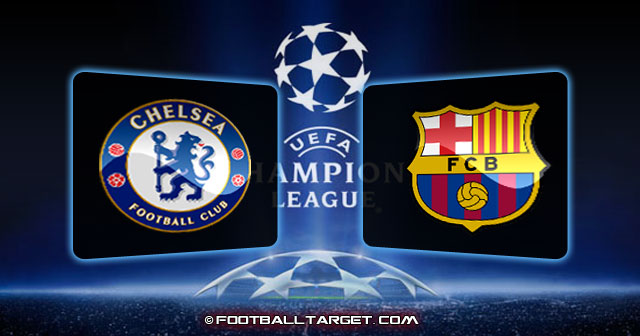 Tails, from that game are been dragged until today, the Britain media are that ones with particular fervor emphasize the story and already hot atmosphere brought to white heat. Chelsea footballers after the change on the bench ( Villas Boas – Di Matteo) are playing much better, but better is not good enough for Barcelona, whose football today has all the elements of poetry, and sometimes of science fiction for other teams.

But in London they have an answer for Barcelona, here they are never overly played in five meetings at Stamford Bridge, as Chelsea has won three times, only one Barcelona. Coaches have not yet announced lineups, but secret among the team does not exist, we see a clash of two football schools, two different concepts, and the winner will be known anyways after second match leg of Champions league semifinals..

Blues have been 100% successful at home in European competition this season and when you take the last history, the last team which beat them at home is Barcelona and that was back in 2006 when they celebrated with John Terry own goal in 71 minutes and goal of Samuel Eto’o in 80 minutes where the meeting ended with 2:1 score. Chelsea did not celebrated on the last three meetings at this stage against the Spanish representative, while Barcelona won the only two of the last four games.

Both teams have felt the victory over the league meetings last week, Barcelona won on away match against Levante where they celebrated with a 2-1, while Chelsea won in the FA Cup semi-finals defeating Tottenham 5-1 ,where they had five different scorers in that game and overall they totally outscored their London rivals, and progressed to finals where Liverpool awaits them.

Coach Di Matteo has just turned in a complete season for Chelsea team after he took over from former players coach Andre Villas-Boas after he recorded the desperation with these players, but what right and in particular is yet to come on Wednesday night.

Blues made their passage to this stage of champions league over the Portuguese Benfica where players were tested to the limits of endurance ,but manage to pass with total 3:1 score. Benfica was much better team in the second meeting which was played at Stamford Bridge stadium, but was weakened when Maxi Pereira was sent off in the first half.

League stats of Chelsea is quite unconvincing because they in last five games have only two wins, so that the competitions finish among the top four on the table depends on other games because they are on the 6 position with the two points behind Newcastle and Tottenham.Unfortunately for Chelsea team, David Luiz will definitely miss this first duel after he sustained a hamstring injury against Tottenham in the FA Cup. The Brazilian player will certainly be a big disadvantage for the team from London, because he certainly had what it takes to stop the attackers Barcelona.

Except that, Chelsea coach Di Matteo has no other concerns for this meeting and the good news is that Branislav Ivanovic returns as his suspension is only legit for the English Championship.
Drogba presence in the match against Tottenham, where he was up to 84 minutes of the meeting ,suggest that in this one against Barcelona we could Fernando Torres in attacking line.

Juan Mata will again as always be creative artist of all Chelsea ´s attacks ,while Ramires or Daniel Sturridge will be on the right-wing, while the left-wing will be occupied by Florent Malouda.Lampard has played all 90 minutes on Sunday so it will be interesting to see whether it has managed to replace Jon Obi Mikel and Raul Meireles.

In the back will be Gary Cahill and John Terry as the central couple of defenders, while Ivanovic and Ashley Cole will occupy positions on the sides so for this match we could expectet 4-2-3-1 formation with Cech, Ivanovic, Terry, Cahill, Cole, Mikel, Meireles, Ramires, Mata, Malouda and Torres in the first lineup.

Catalans are currently in superb form with a series of 11 straight victories in league competition and with thus they cut the gap between Real Madrid and them to only four points.Lionel Messi was simply the heart of the team and everything what happened after some of their poor results in the Primer League, especially after the Argentine scored a top 41 goals.

To add even more drama in the season finale, Barcelona at the end of the week welcomes its biggest rivals in all competitions, Real Madrid at the Nou Camp stadium, its this El Clasico found in the right sandwiched by two semi-final Champions League encounter.

Pep Guardiola team has had its share of uncertainties in the quarter final match against AC Milan , the match ended with a final 3-1 after much controversy and suspicious of judicial decisions.

The first meeting was played at the San Siro stadium, where with a lot of chances from both teams,match still finished without goals .It was a match , where Milan still had many more opportunities and possibilities to achieve goal,then in the second match where they paid for all my mistakes that were made in the first duel, and thus allow the two penalties in the first half at the Nou Camp stadium.

Messi was the scorer of the two penalties awarded and now the attacker is at the top of Champions League with a total of 14 goals scored this year, but the young wizard as he affectionately called from football fans will still have to score against Chelsea, because for now in six meeting he did not manage to score,so it will be surely a great motivation for this great Argentine.

Josep Guardiola assured the packed press room that his team is very aware of the difficulties of tomorrow’s Champions League semi-final match at Stamford Bridge..

Guardiola should have a starting lineup with Dani Alves and Gerard Pique in it,after the duo missed the league matches due to injury. Both players found themselves on the bench against Levante ,but Alves entered as a late substitute. Pique and Carlos Puyol will be very important defense couple as they will have the task to cope with physical access of Chelsea players.

Alves and Adriano will start as side back defenders,and the central part of the field will be normally set for Sergio Busquets, Xavi and Iniesta. Messi and Alexis Sanchez will have to demonstrate their skills in attack where Cesc Fabregas will join them.

Andrés Iniesta insisted this afternoon that : “the team are travelling to London looking for a win and not a draw”

It is certain that El Clasico match is also in the head of coach Guardiola but his team will have to give theirs best in these two meetings to achieve their desired ambition,and get some good away result.

Regarding to this meeting, we could expect a 4-3-3 formation with Valdes, Pique, Puyol, Adriano, Alves, Busquets, Xavi, Iniesta, Messi, Fabregas and Sanchez in it.

Match Prediction : On the paper, Barcelona has a much better team then the Chelsea , and is sure that a bit of space and possession which Blues will get here ,must use on the best possible way, if they want to find themselves in the Champions League final.So they will be for sure oriented to counter attack hoping that quick F.Torres would have his day.But,as the most bookies predict Barcelona is big favourite in these two matches.But first,they must get some good result here at London.Both teams to score,and you could try Leo Messi to score a goal.