This is certainly the most attractive match of the ninth round of the English Premiership, where two teams will met which in front of the beginning of the season were one of the main contenders for the title of champion.

Consequently, at this point, Chelsea FC team takes second place on the table, with just two points less than a leading team Arsenal, while Manchester City if fourth, with one point less than Chelsea.

As for their mutual matches in the last season, a lot more successful were “citizens” who celebrated in the English Super Cup, FA Cup and the Premier League as hosts, while at Stamford Bridge it was a draw 0-0.

Of course this stats , will be an additional motive for The Blues from London to finally defeat the Citizens.

Jose Mourinho´s Chelsea, have won all four of their Premier league matches at Stamford Bridge, while in general Mourinho s unbeaten in 64 Premier League home games as manager of Chelsea (W50 D14).

The Blues are on a great run of six wins and one draw, and by winning 10 points in the last four rounds they again came just one step away from the top of the table. In the last  round Chelsea beaten Cardiff City with 4-1.

In their eight Premier League matches this season, since September’s 1-0 lost against Everton, Mourinho´s side is unbeaten

Things look good for Chelsea also in the Champions league, where after the first round blunder at Stamford Bridge and defeat from Basel 2-1, Chelsea enrolled two big victories, against Steaua and Schalke, which can only boost the confidence of the players ahead of encounter with Manchester City.

Mourinho could mix a things in the first lineup, so Cahill could play instead of David Luiz, Schürrle instead of Juan Mata and Torres instead of Eto´o.

Ashley Cole is set to return in the first XI, and only a long-term absentee Marco van Ginkel is Chelsea only sidelined player.

Just like Chelsea, so the team of Manchester City obviously have found the right form , as in the domestic championship they won twice in a row , against Everton and away at West Ham , and all this they spiced up a four days ago in the third round of the Champions league , by celebrating in Moscow 2-1 against the Russian champion CSKA .

In this way, players of the coach Pellegrini have reached the second position in their group , and it is obvious that for the first time in its history, Manchester City will pass in the knockout phase of the Champions League , after all this season this is rated as their top priority.

On the other hand , in the championship Citizens manage to cut the gap to just three points behind the leading team, Arsenal, so that they are still in the game for the very top , especially if they remain unbeaten and on Sunday at Stamford Bridge .

Because of this we could expect a something more defensively approach from Citizens , while in their attacks their will be looking to score goals over the brilliant Aguero , who netted six goals in the championship matches and against CSKA he netted a double. Let’s say that for this meeting Kompany and Demichelis are sidelined due to injuries.. 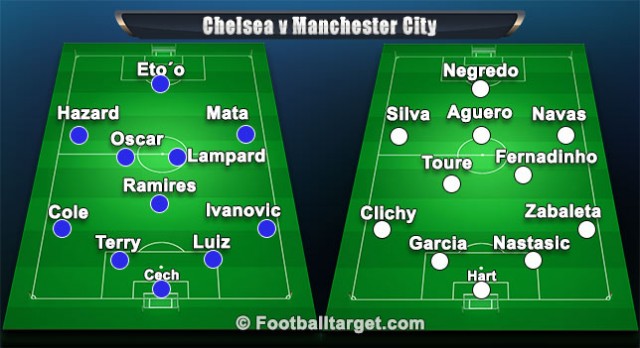