Europa league Final : Chelsea – Benfica;History in the making as the Clash of the Titans takes place at Amsterdam Arena
Chelsea and Benfica go head to head yet again in the spam of 389 days at the Amsterdam arena to decide who will takes home the title of Europa league champions 2013. 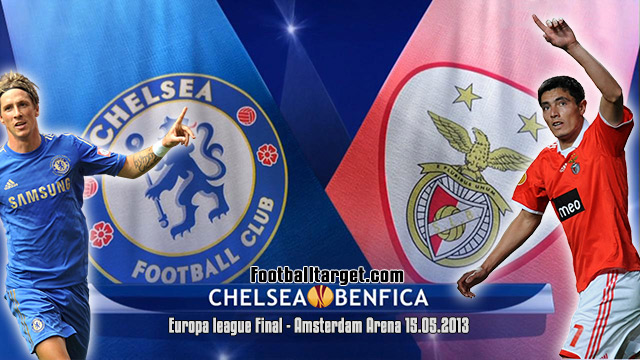 Chelsea , the current holders of the Champions league are favourites for most of the bookies to win tonight’s epic encounter.
Looking at the team history , players , and the amount of matches played in Europe, both the teams are almost equal.
It is obvious that Chelsea has more talent when it comes to playing 11 and the bench, but looking at the form of NO 7 of Benfica , Oscar Cardozo , nothing can be said.Clearly , Benfica will be the underdogs but history knows that 90 minutes of football cannot be predicted.

Both teams haven’t won this title in their history, so they would be looking forward to end the drought.
Chelsea FC, on the other hand could be the first club to hold both the UEFA trophies at the same time , though , the Champions league final is next, so they won’t be able to hold both the titles for long.

Last week’s results were different for both the teams.
Chelsea , going down to Villa 1-0 came back and won 2-1 with Frank Lampard becoming the all time scorer for the club while Benfica on the other hand, has lost their match to their rivals, Porto , and now sit 2 points from 1st spot,while one match in domestic competition is left.

Team News
Major concern for Chelsea will be the unavailability of Hazard whose been terrific from the time he joined Chelsea,while the key defender John Terry will miss out this match due to knee injury, which will force him to miss out on consecutive UEFA finals.
Benfica and their manager Jorge Jesus doesn’t have any problems to contend with.

Both the coaches , Jorge Fernando Pinheiro Jesus and Rafa Benitez know the importance of this match.
Benitez will be leaving Chelsea at the end of the season and knows that if he delivers this trophy, he could get another job at some bigger club.

Both strikers are in fine form which certainly will make this match on the offensive perspective much more interested.
Talking about Torres , he has scored 5 times in the last 7 matches in Europa league.The Spaniard has played a few important matches like this,with Chelsea and for Spain,ending the most of time like a title winner.This could be a big advanatage compared to Cardozo who is team leader for several years,but the recent last-minute defeat from Porto in domestic competition could impact on him and the whole team,who have slipped only a round before the end,the league´s first position to their rivals.
Like last year , Drogba won it for Chelsea , and now Torres will be looking forward to winning it for Chelsea.

More than 30000 Chelsea fans have traveled to Amsterdam. It will be one of the best finals to watch with both teams looking to win it. Having signed a one year contract extension, Lampard is expected to captain the side and will be looking forward to lifting the trophy for the second time in one year,after winning the Champions league one.

Match Prediction : To predict the winner here,will not be so easy.Both teams are in fine form,but the English side this year has lost all trophies they could possible lost. English Community Shield on a start of the season by Man City,the World Club Cup, possible FA Cup and Premier league one.To finish the season without any trophy,but being so close to so many of them,could be a huge motive for the Blues.

Benfica as we said , in the last league match, in the last-minute conceded a goal,which puts them back to second position,trailing only a point behind Porto.This was certainly a big shock for them,as the title was already in their hands.It is uncertain how this will impact on team,who only few days later are playing another huge game.

That´s why we decide here to go with Chelsea to win the Europa league trophy,and another good option here can be, both teams to score.For both option, Bet365 (below) is giving a good odds and a 200£ welcome bonus.

So do you see a different winner here or you don’t agree with our match prediction ? Let us know !