Chelsea way to the finals of the most prestigious Europe clubs competitions started in the E group stage with German Bayer Leverkusen,Spanish CF Valencia and Belgian KRC Genk.Chelsea opened 2011/2012 Champions league furious with 2-0 victory at Stamford Bridge against Bayer Leverkusen.Chelsea was by far better team and had eleven shots on the goal,while Leverkusen had only 2.Chelsea took the lead with David Luiz goal in the 23rd minute,while Juan Mata clinched 2-0 win and the first three points for the Blues. 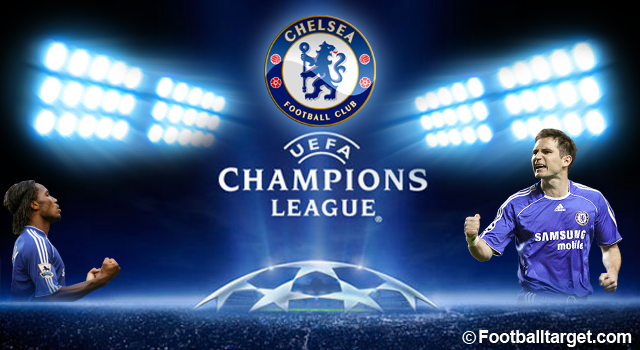 Next round Chelsea travel to Spain and plays against Valencia,who first match played against Genk and draw it.Chelsea could come in this match more relax than Valencia,and they did exactly that.They come into an open match where both teams had plenty of chances.In such a match Chelsea took the lead ,and Frank Lampard was the scorer.Until the match end which was pretty equal,Valencia found the strength to equalize from Roberto Soldado’s 87th-minute penalty.

With four points on their account the third match Chelsea welcomed Belgian Genk,and completely outplayed Belgians,not allowing them a single shot towards the Cech goal.Chelsea won the match with high 5-0 which was also their biggest ever home win in the UEFA Champions League.Scorers were 1:0 (8.) R.Meireles, 2:0 (11.) F.Torres, 3:0 (27.) F.Torres, 4:0 (42.) B.Ivanovic, 5:0 (72.) S.Kalou.

In front of the away match with KRC Genk, Chelsea occupied the first place with 8 points,which however started to melt after 1-1 draw with Genk where Chelsea took the lead with Ramires goal in 26th minute.Genk footballers this time did not surrender and they fought back,what paid off to them,as Vossen scored in 61st minute for the final 1-1.

Even after this match Chelsea was still on the top of Group E with 8 points.Second was Bayer with 6 and Valencia with 5.Than things start to complicate for Chelsea Blues.In the fifth round of Group E,Bayer Leverkusen hosted Chelsea and manage to comeback and win the match with 2-1.Chelsea once again took the lead,over Didier Drogba on the beginning of the second half in 48th minute.Match was equal and both teams had their chances.

After having a1-0 lead,Chelsea normally,oriented more on defensive,what as the final score suggest was not such a good move.First,Derdiyok in the 73rd minute scored and level the result,and then Manuel Friedrich headed a winning goal in injury time.Leverkusen with this victory,overtook from Chelsea first place of Group E,and had 9 points,while Valencia with high 7-0 win against Genk at home equalized with Chelsea on the second place.Both of them had 8 points.

In the last round,Leverekusen already secured the next stage of the Champions league,while Chelsea needed at least a draw to reach the next stage.Match started excellent for Blues.Once again Dider Drogba found the net already in the 3rd minute and Chelsea had all they need.But,Valencia did not gave up,they needed a win here.They play by far much better than Chelsea and had lots of chances.But,Chelsea is Chelsea,one more counter attack,one more goal.

It was 22nd minute and Ramires raise the advantage to 2-0.Chelsea had the result which leads them to the next stage,and so they leave the possession of the ball to Valencia and waited patiently their next chance.It came in the 76th minute when Drogba once again scored for the final 3-0 victory.Chelsea confirmed their place to the last 16 with this win for the ninth successive year .Valencia in the end had 66% of ball possession and the same number of shots on target but Chelsea done what Valencia could not,their chances Chelsea footballers converted in the goals.

Round of 16 ,match with Napoli

Napoli at their Stadio San Paolo won the first match and created a solid advantage for the second match.In the match that did not provide much quality as both teams made a lot of mistake.Napoli was by far better ,but still,once again Chelsea took the lead in the 27th minute after a major error of Paolo Cannavaro,Juan Mata scored.

Still,Chelsea until the end of first half manage to lose advantage .First Ezequiel Lavezzi in the 38th minute equal to 1:1, and then in the last-minute of the first half compensation time Cavani brought advantages to Napoli.In the second half both teams had their opportunities, but only Lavezzi used his, and in the 65th minute he set the final 3-1 result ( Full match Highlights ).

When the whole England feared that neither one England club will play in the semi-finals of the Champions league,Chelsea in a dramatic match at Stamford Bridge manage to annulled advantage of Napoli and reach the semi-finals.

Napoli arrived in London with two goals advantage, which disappeared when Didier Drogba scored in the 29th and John Terry in the 48th minute. The guests in the game returned Gokhan Inler in 55th minute, but to the result of the first match Frank Lampard equalized from a white spot in the 75th minute.

In the last moments of the first extra time with the fourth goal (then) for the home team scored Branislav Ivanovic and domestic by the end managed to keep the advantage and win passage among the eight best teams in Europe. Chelsea 4-1 Napoli Highlights

If we look at the statistics and the overall impression in both games, Benfica was a much better team in two games.They played more attractive  football, they had more chances, but once again,Chelsea took advantage of their chances in both games and entered the semifinals with a new coach Di Matteo where , Barcelona waited them.

In the first match,Chelsea’s on away match at Benfica entered  minimum, but very valuable victory .After a quiet first half, in which there were no special chances on either side, in the second half Benfica came a little more determined to score the goal, but when their pressure was not materialized, the guests scored, in 75th minute when Fernando Torres  passed on the right side and cross to the edge of five meters box where Kalou Solomon sent it behind home  goalkeeper Arturo. ( Full match Highlights)

The first half  of the second match between Chelsea and Benfica was very similar to the first game – Benfica was attacking and creating opportunities, and Chelsea from their only dangerous action came in the lead. Garcia made a penalty on Ashely Cole, and a safe performer  was Frank Lampard.In the 40th minute Maxi Pereira received his second yellow card ,and Benfica was left down with ten players on the field.

The guests in the first ten minutes of the second half looked dangerous, but then they quite slow pace and it seemed that Chelsea will calmly finish the game. However, after a corner kick in the 85th minute Benfica over Garcia scored ,after what until the third minute of penalty time the siege of the Chelsea´s goal lasted,but then after a quick counter attack  Raul Meireles  buried the ball with powerful blow and Chelsea reach the semi-finals. ( Chelsea 2-1 Benfica full match Highlights)

Barcelona was a big favorite here,that’s clear.All world bookies even in the first game gave them much more chances to win and reach the Champions league finals.And from the first minute of the first match,Barca set themselves as the game favourites.They took the ball,had a chance after chance,plenty of shots on the goal,despite only one of the home team,and like this whole preview said,od course,Chelsea took advantage of it.Drogba made a difference for Chelsea.Barcelona had a high 72% of ball possession,but Chelsea once again beat all odds and won the match with 1-0. (Chelsea 1-0 Barcelona full match Highlights)

Even in the second match,really no one gave the chance to Chelsea,after seeing what happend in the first match.Barca was even bigger favourite here.Of course,Di Matteo set the team to defend  result from the first match,what was completely logical,but this strategy failed as first Busqets scored for 1-0 and Andres Iniesta for 2-0.Trailing 2-0,and with one man less,as John Terry received direct red card in the 37th minute,it seemed like the match is over.But,it was far from over.

Ten-man Chelsea manage to pull off a remarkable rearguard action,and they reach the Champions league finals with Bayern.First,Ramires score and decrease Barca´s  advantage to 2-1,and the game changed.Barcelona players obviously tired,and having the El Classico in their mind pull one level down,and reduce the pressing little,probably thinking that the match is over.They tried,and still had a lot of chances,but this day Fortune God smiled at London´s Chelsea.

World best player Lionel Messi was nowhere to found,and all attacks of Barcelona were barren.To add ” ice on the cake”,Chelsea from the second counter attack scored trough Fernando Torres who enter the game as substitute.Torres sprinted clear as Barcelona sought the winner, he round Valdés and scored for the final 2-2,and Chelsea make their way to the Champions league finals.(Barcelona 2-2 Chelsea full match Highlights)

To conclude,Chelsea on their route to the Champions league final,manage to achive incredible things.Every time when people sent them off,they stubbornly bounce back and show their is still plenty  that they can offer.After round stage it is proved to be that Chelsea´s counter attacks are their most “deadly weapon”.