Portuguese player and the Real Madrid Star Cristiano Ronaldo in competition with Bayern Munich duo Manuel Neuer and Arjen Robben has been voted as the top best player in 2013-14 by Uefa. 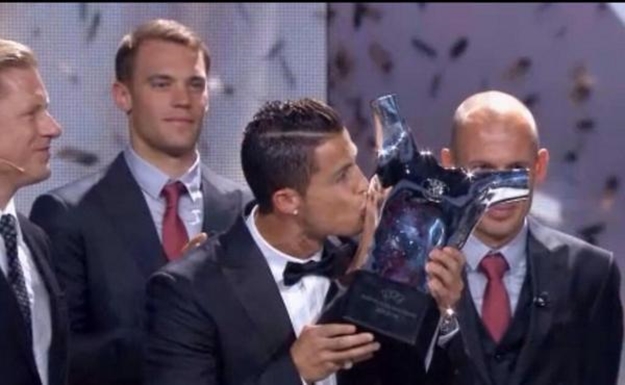 Ronaldo has picked Uefa’s Best Player in Europe for his contribution to Real Madrid in winning Champions league. The 29-years old Ronaldo has scored 17 goals in 11 European games for The Los Blancos on their way of winning the Decima. Ronaldo also helped Real Madrid winning Copy del Rey as Madrid completed the cup double. While the club’s career was more than good for Ronaldo, with a national team Ronaldo didnt had success as Portugal was sent home already after the group stage.

“This is my trophy, and all of those who work with me. I want to Thank to my teammates because without a team it’s impossible to win a single trophy. Could Real become the first club to defend the Champions League title winner? Of course it can” !

With Real Madrid’s Ronaldo won the Champions League last season, but at the World Cup was a disappointment, since the competition ended with Portugal already in the group stage.

Selection of the best players in Europe, organized by UEFA and the European Sports Media held since 2011 on the initiative of the President of UEFA Michel Platini. The first year is celebrated Lionel Messi, Andres Iniesta next, and last Franck Ribery.

Award for the best players in Europe, which is organized by UEFA and the European Sports Media is held since 2011 on the initiative of the President of UEFA Michel Platini. In The first year Lionel Messi has picked this award, Andres Iniesta next, while the year the French Franck Ribery.

Do you think Ronaldo deserved this award or Ribbery / Neuer deserved it more ?