Group A match between Croatia and Mexico in Arena Pernambuco will give us the answer on who will be the second place team that will progress and play against the Netherlands who booked the Group A first place with a 2-0 win over Chile. 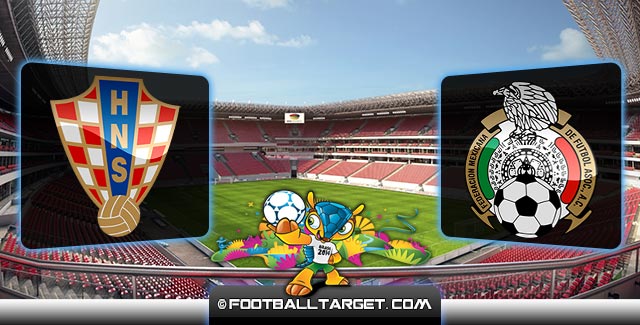 It’s very unlikely that Cameroon can trash Brazil aside, so most probably Brazil will finish the group stage on the first place. That leaves only one place left and Croatia against Mexico needs a win to clinch the second spot. Draw or defeat to Mexico will place the Latin Americans on the second place.

This will a fourth mutual match between these two side, where in the first two friendly games celebrated Croatia, while 12 years ago at the World Cup in Japan and South Korea, Mexico was better with 1:0.

Surely the Croats will look to take a revenge, but this task wont be so easy. Mexico enrolled a win against Cameroon 1-0, having two regular goals disallowed, while in the second match with Brazil they grab a 0-0 draw, which gave them a one point advantage towards Croatia.

Ivan Rakitic : “The pressure is similar to the opening match”.

“We need to win to proceed to the next round. We are ready and we know it will be a difficult game against Mexico. We must play perfectly, we want to win and I hope we accomplish it.”

On the other side, Croatia were robbed in the World Cup opening against Brazil and thus suffered a 3-1 defeat, while in the second match, the Croats led by Mario Mandzukic’s double smashed Cameroon with 4-0.

Croatia Boss, Niko Kovac has only two dilemmas for this match. The first is the question of the left side, and whether he will send Danijel Pranjic or Sime Vrsaljko in from the first minute. The second one is, regarding the tactic. Whether he will start with Brozovic at the DMF and so gave a little more space to Ivan Rakitic, or the fresh Barca player will start behind and Inter Milan player, Mateo Kovacic will go in, like against Brazil from the first minute.

Mexico against Brazil shown a lot, and had their chances even to snatch a win, but on the other side, Mexico’s goalie Ochoa was having his day and denied my opportunities against Brazil.

Probably with the same tactic Mexico will start against Croat, looking to knock them off with an outside the box shots. Reason is simple. It works ! Only one goal conceded so far and having Manchester United star Javier Hernandez on the bench shows that.