Unlike the second match (Italy – Ireland Preview), this match from the group C should be much more interesting, because both teams are still in the race for placement in the next round, and certainly with all forces they will try to come to these three critical points. 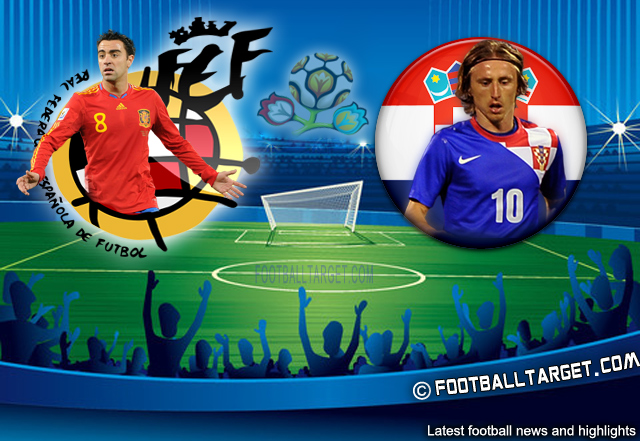 However, there are two scenarios in which both teams could reach the quarterfinals,and the first one is if Italy fails to beat the Irish, while the second scenario is if Spain and Croatia play a draw, but with at least two goals on both sides. Otherwise, these two selections so far have weighed their strentgh four times , and it was always in friendly matches.

Somewhat more successful was Spain who has achieved two victories, while Croatia just one, and one meeting finished without a winner.

However, all this was a long time ago where did not play this new generation of Spaniards who simply trample all in front of them, which at the last two major competitions have come to the end and raise the trophies.

Of course at this Euro 2012 there are one of the main favorites for the title. After a draw with Italy in the first round, their superiority is best confirmed in a duel with the Irish, who had absolutely no chances during the entire 90 minutes and were eventually declasse with high 4:0.

In that match,unlike the first one with Italy, Spain coach Del Bosque this time start the match with a real striker, Fernando Torres, which was worth it, because he was a double scorer, while the one goal added Silva and Fabregas.

For Croatians certainly this match will be far from easy, especially since Del Bosque this time will not make any changes in the first team, while in the case of any problem he has a large number of high-quality solutions on the bench.

I respect every team, so how not to ,such a good team like Croatia. She missed the last World Cup in South Africa, but has played well in qualifying, especially in that decisive match against Turkey, while the Croats have been good and against Italy. We must be very concentrated, otherwise we are in great danger – said Del Bosque

Unlike Spain, Croatia in the last round literally drew in a duel with Italy, as shown in the game in the first 45 minutes at least, could have a backlog of two goals, but mostly thanks to brilliant goalkeeper Pletikosa, and lack of concentration Balotelli, on the half time,the result was only 1:0 for Italy, after a masterly goal from free kick by Pirlo.

However, in the secondhalf of the game came out on the field a lot more aggressive and more engaged Croatia, while some changes in midfield resulted in a first stability in their ranks, and then Croats start to play something more concrete in the front, what ultimately paid off to them in 71st minute, when with his third goal on the the Euro, on the 1:1 align Mandzukic.

Of course he will, in this very important meeting with Spain be one of the main Croatian hopes, but this time his partner in attack is likely to be Eduardo, because his speed and resourcefulness could possibly come to expression next to the defense of Spain which is quite slow.If Croats decide to change a little their formation and play in 4-2-3-1 then Mandzukic probably will occupied the right flank,and Jelavic or Eduardo will be the only striker in the team.

Also, in the midfield and defense are expected to be some shift, where an experienced Darijo Srna should move a little more forward, to make “room” in the last line for another defender, probably Domagoj Vida, who could compensate the lack of speed of central defenders, Corluka and Schildenfeld.

Entering D.Vida in the first lineup, automatically means that one midfielder will have to go on the bench, and it will certainly be young Perisic, who against Italy did not play so look good, while in this new formation,Rakitic will switch to the left side, which is actually his natural place in the Sevilla.

Prediction : While in Italy, all fears of the famous 2-2 draw, our opinion is that the current European and world champions will not so easily let that scenario to happen, and just like against the Irish, once more on the ground they will prove their indisputable quality.Spain to win.

Another good bet to take here,is over 2,5 goals.What ever team took the lead,the second one, will have to score to keep their chances live.So lot of goals should appear here.

Watch match Spain vs Croatia from ours live stream section