The first European Championship quarterfinal match bring us teams which started this competition with opening defeat, but they managed to pass the group stage and can now even reach the semifinals.

Czechs in the first Euro 2012 game suffered from Russia with a 4-1, but then managed to win twice, Greece and Poland, and won the first place in group. Portugal defeated by Germany with minimal 1-0, but after that they managed to beat Denmark and the Netherlands and finished as the second in Group “B”. 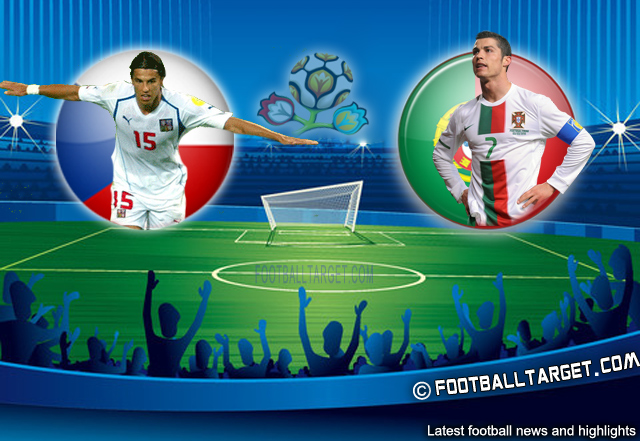 This will be their third match and third at the European Championships. The first time they played 1996. in England in the quarterfinals and then the Czech Republic celebrated 1-0 with goal of Poborski. At the last European Championship these two teams played in the group stage and Portugal won 3-1 with C.Ronaldo brilliant goal and two assists.

The Czech Republic along with Rep.of Ireland was the biggest outsider of this championship and the only thing which slightly went in their favor was a slightly weaker groups in which they find themselves.

After the first match and what they presented against Russia , only reinforce the impression that they are total outsiders, and that even in the group stage they have no chance.But,Cezch surprised,and were much better already in the second round when managed to score two goals in the first six minutes to Greeks and won that match,as well as in the third round against the host,Polish,when,once again they shown character and won with 1:0.

Coach Bilek in this match had to play without the “brain” of this team, Tomas Rosicky, which was a huge handicap for them,but it seemed to only further motivate the Czechs who were able to score over their hero in this championship, midfielder Jiracek.

Kolar has changed Rosicky and that was the only change, while striker Baros again got a chance and trust,which he paid off with assist for the goal.

For this quarter-finals, again Rosicky os doubtful and will probably start on the bench. The rest of the team are definitely not going to change, because Cezch have no other injuries, and they managed to avoid cards suspension.

Regardless to the strength of the group,in which Portugal was, nor to the Portuguese were given some big chances for their placement in the quarterfinals, but,unlike the Czech they still were not outsiders.

Certainly their chances fell of even further after the opening defeat against Germany.However, their game show some promises,and already in the second round they were much better and they managed to defeated Denmark, although they had little luck and again showed some weakness.

In both these matches,Ronaldo has been below any level, so his “explosion” was expected in the third round,and match with the Netherlands .And exactly this happened.Ronaldo woke up, scored both goals and was the best player in the match, and the Portuguese managed to win that match,although the Dutch took the lead.

They are specific and unique ,as they in all three matches started in the same composition, which only proves that the coach Paulo Bento knows what he is doing and has great confidence in his team.

On the championship they came without any major problems with injuries, and in the group stage they have played without these problems. Cards suspension they avoided also, so we can be certain that in this fourth match for them,coach Bento will sent the same lineup in to play.

In the quarterfinals, which few could expect,the Portuguese are the team which have an advantage, because they raise their form. Portugal is complete,and objectively have the stronger team with Nani and C.Ronaldo who “woke up” while the Czech Republic is without Rosicky, and if nothing else this might be a winning key.Portugal to win.