Liverpool have completed the signing of the Brazilian midfield Roberto Firmino from the German side, Hoffenheim in a deal worth €40 million. 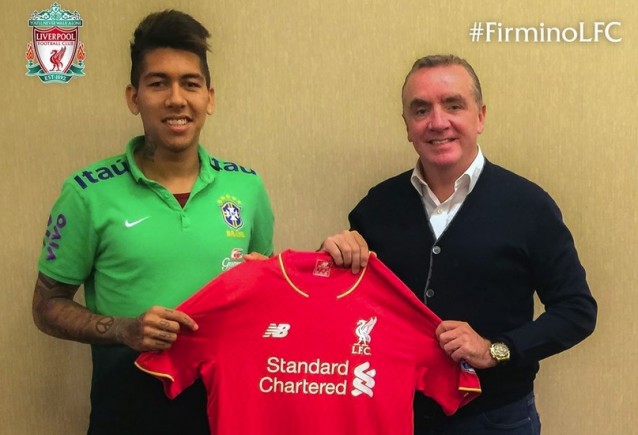 A few days back we reported the news that the Reds have entered the race with Manchester United to capture Firmino, and now Liverpool have finished the job.

With a deal estimated at €40 million Firmino will become the second most expensive player in Liverpool history. Only Andy Carroll was more expensive, costing around 50 million when back in 2011 he arrived from Newcastle, while Adam Lallana last year arrived from Southampton for 35 million.

Firmino with the ‘Reds’ will sign a contract for five years, and his weekly wage will be more than 140,000 euros. The Brazil international has to do a medical and to get a work permit, and this will be done after returning from the Copa America in Chile where he’s with the national team of Brazil.

The Club confirmed the news

#LFC are delighted to announce they have signed Roberto Firmino from Hoffenheim, subject to a medical #FirminoLFC pic.twitter.com/rWRHhTmHuB

The 23-year-old Firmino was linked with a move to Man Utd, but with Raheem Sterling’s future in doubt, the Reds opted to finish this job sooner than Man Utd.

Firmino played for Hoffenheim for four and a half seasons where he came in December 2010 from Figueirense, during which he recorded 151 appearance for the Bundesliga team, scoring 47 goals in the process.

Firmino thus became the fifth reinforcement of the ‘Reds’ for the new season, after James Milner, Danny Ings, Adam Bogdan and Joe Gomez.