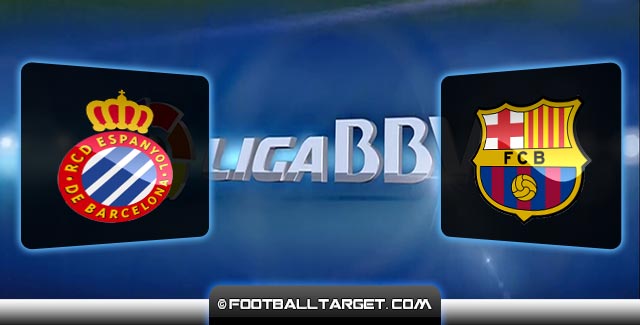 After sealing the semi-final spot of the Champions league competition with a 2-0 home win over PSG, Louis Enrique’s side on their way of winning the possible treble, returns to La Liga competition where their neighbours, Espanyol awaits them. Both side are in a good form, home side still looking for their way to grab the place which leads into the Europa league while Barcelona are in need of another three point in their charge for La Liga title. Barca have not been beaten by Espanyol since 2009, while in the last 9 meetings Barca celebrated in all.

For Sergio’s men this derby comes in a good moment, because they are in good shape, six unbeaten games, two win, four draws and that is why they hope that they can compete with even Barcelona at this point. They have not been beaten since the beginning of March, while especially are playing good football at home, where they won the vast majority of points. In the recent time Espanyol draws a lot, while it should be pointed an away win vs Villarreal, three rounds ago. After that win, they beaten Athletic Bilbao at home while on tour in Valencia, against Levante they played a 2-2 draw, despite having a 2-1 lead, only three minutes before the end. right sideback Mattioni is injured for the clash with Barca, but Sergio does not have any more injury problems and he shall send the best from the first minute.

A scorer of two goals against Villarreal, Caciedo believes that his team have what it takes to make an upset against Leo Messi and company:

“We hope to play well at home lately: go for the goal and for the result,” he said.

“We trust that we can make a great match, we feel good, we are on a good run and we want to take advantage of our condition. We hope the fans will give us support from the first minute.

“It’s a great opportunity to prove that we are strong at home and we feel comfortable.

“They have great players; the great strength of Barcelona is in their attack, because they have great offensive players, we know of their potential.

“We will see how we can counteract the potential Barcelona have. We have clear ideas and we have to keep playing our football.”

Behind Louis Enrique’s side are four tough matches, two against PSG, one against Sevilla and the latest one in domestic league, against Valencia. Three wins and one draw, against Sevilla after having a 2-0 lead, might be called a good result, and while the Blaugrana are still in control on the first place in La Liga, to keep things that way, any other blunder could ruin all the good things.

Against PSG, except Messi, Suarez was in superb form, scoring two goals which were enough for a 3-1 win in Paris, while in the second leg match, it was the Brazilian Neymar who was on the level. This only tells how strong is really attack of Barcelona. After finding out the name of the club with which Barca will play in the semi-finals of the Champions league, Bayern Munich, Enrique most likely will send the best to the pitch this Saturday to avoid complicating the race for the league title, before the Champions league encounter with the Bavarian giant.