Presentation of representations for the European Football Championship we continue with Group B and the football team of Netherlands. 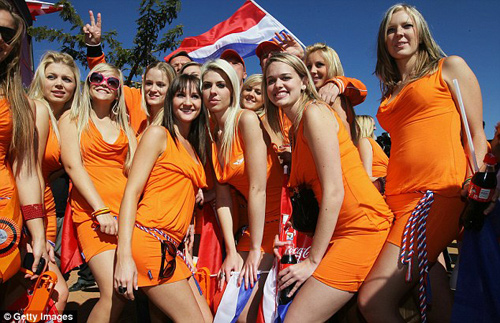 Dutch  on the Euro qualify as the first placed team of the fifth qualifying group, where they in duels with Sweden, Hungary, Finland, Moldova and San Marino won 27 of the possible 30 points with 37 goals and eight conceded goals.

Orange, which have overrun all the opponents in a row, San Marino (11:0), Hungary (5:3), Sweden (4:1), have enrolled at the start nine consecutive wins, and the only defeat they suffered in the last round in Stockholm where the Swedes celebrated with 3:1.

The hero of the Dutch national team in qualifying was the Schalke striker Klaas-Jan Huntelaar who scored in 10 games , 12 goals. The closest companions  to him were Dirk Kuyt and Robin van Persie, who scored six.

The Dutch were first performed at the European Championships 1976th in Yugoslavia when they won for them a disappointing third place. After the World Cup finals 1974th everyone have expected that the team led by  Cruyff and Neeskens willwin the title, Czechoslovakia knocked them in the semifinals.

After a generation of “total football” appeared a great stagnation. At European Championship 1980th they knocked from the group stage. Dutch re-appeared in Germany at Euro 1988th when they led by a fantastic trio Gullit, Rijkaard, Van Basten raised its first and only European trophy by winning in the final against the former Soviet Union.

After that success,they  have not missed any European competitions. Penalty kicks have been fatal for them in the next three competitions. At Euro 1992nd they came to the semifinals and lost from the future champions Denmark. In England, 1996th they lost in the quarterfinals from France.

2000th The Netherlands together with the Belgians were the hosts of Euro and all were expected from them to go to the end. However, penalties have again proved fatal for them,in the semifinals against Italy.

In Portugal 2004th Dutch have again managed to reach semi-finals, but this time the Portuguese have celebrated with 2:1, while four years ago they fell out in the quarterfinals after playing extra time where with 3-1 was better Russia.

60-year Marwijk had a modest playing career, and almost the entire professional career played in the Go Ahead Eagles and MVV Maastricht entering just one appearance for the national team. Coaching career Marwijk  began in the 1990th year.

He led the Dutch lowet league teams, and the first serious job for him was at Fortuna Sittard, which he led from 1998th to 2000th , when he entered the Cup final. At the beginning of the new millennium Marwijk took over Feyenoord, with whom in the four-year mandate, managed to win second place in the national league, Champions League and UEFA Cup 2002nd year.

Two years later he takes Borussia Dortmund, and 2007. Marvijk returns to Feyenoord. Bench of the national team he took over from Marco van Basten 2008th year after the European Championship.

Great success he achieved at the 2010 World Cup,in South Africa, where he was defeated in the finals from Spain. Finally let us mention one interesting fact, Bert van Marwijk’s is father in law to Marc Van Bommel.

Although Netherlands abound with great football players,  after a brilliant season in the jersey of Arsenal, where he scored 37 goals with 15 assists and was declared the best player in Premier leaguw, we can rightly say that Robin van Persie’s is the first name at the moment of  Dutch national team, with due respect for Sneijder, Huntelaar or Arjen Robben.

28-year old Robin van Persie began his career in  Feyenoord for whom in the three seasons, He scored 22 goals in 78 matches. 2004th as a 20-year-old van Persie has moved to Arsenal for just four million.

Since then, he played 278 games for the Gunners in all competitions, and has enrolled 132 goals and 60 assists. However, there were no trophies. He won the Uefa Cup with Feyenoord and the FA Cup with Arsenal. For a national team he made his debut 2005th year and has 62 appearances and 25 goals.

What to expect from Netherlands on Euro 2012

In this formation the biggest victim seems to be Klaas-Jan Huntelaar, who had an incredible season with Schalke, scoring 49 goals in 50 meetings in all competitions.

Marwijk will hardly deviate from its formation, and Huntelaar will his chance wait on the bench as a comma rifle. As is evident from the list, it is a great team, that at every position has an excellent solution.

A lot will depend on the midfield held by van Bommel and De Jong, but on the other hand, Arjen Robben in the mood is the advantage for each team. What can they on the Euro? Group B (Denmark, Portugal, Netherlands,Germany) is a very demanding and if they qualify from the group to the next stage, since it is not impossible they can fail,the way to the semi-final is open for them.

They can be only stopped by penalty kicks … For a believe, however, is that this Dutch team is far better than  the Portuguese,so probably Dutch will fight for the first place with Germans..

Watch all Netherlands matches on Euro 2012 from ours live stream section.