Lack of motivation and tiredness are the main opponents of the Spain at the Euro 2012 in Poland and Ukraine.Their best scorer David Villa is ruled out due to injury,like Carlos Puyol also.Recent conflicts between their defenders Pique and Ramos,does not go on Spain hand,as Spain suffer from the defenders deficit.. 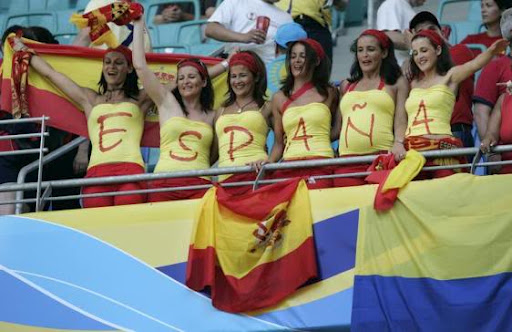 Spain on the Euro 2012 in Poland and Ukraine qualifyed as the first placed team in the final qualifying group, where in duels with the Czech Republic, Scotland, Lithuania and Liechtenstein won the maximum 24 points from eight games with a goal difference 26:6.

Spain is the only team along Germany that on the way to Euro enrolled victories in all the meetings. Liechtenstein was defeated with 4:0 and 6:0, Lithuania twice by 3:1,Scotland with 3:2 and 3:1 , and the Czech Republic with 2:1 and 2-0.

The best scorer of the team in the qualifications was David Villa with seven goals. His closest companions were David Silva with four goals and Fernando Llorente with three goals.

Spain won the title at its first continental championship 1964th when they were hosts .In the finals they beat the USSR with 2-1.The second time the same happened 2008 in Austria and Switzerland where they come as the World Cup champions.During the time in Austria and Switzerland Spain remained unbeaten and there they introduce the new style of football,called tika-taka.In the final match with Germany Fernando Torres was the only scorer.

61-year old Del Bosque was a longtime player of Real Madrid, for whom he played from 1970. to 1984. year. 1973rd he announced the end of his career, and 14 years later began his coaching career by leading the second team of Real Madrid. 1996th he for the short time led Real Madrid, and 1999th finally he got the right opportunity, remaining at the helm of Real Madrid for four years, while winning two league titles and two Champions league titles .

In the 2004 – 2005 season he led Besiktas and 2008th years after the Euro 2008,he got a chance to lead the national team of Spain. He had a very difficult task because the Spain a few months earlier won the Euro, but this has not discouraged him, and he with a great generation led by Xavi, Iniesta, Villa, Casillas won the World Cup in South Africa.

Until now, SDel Bosque led Spain in 51 game, and had a score of 43 wins, two draws and only six defeats. In qualifying for the European Championships Spain achieved a maximum 24 points along with eight wins.

In Del Bosque´s team where are playing Fabregas, Iniesta, Xavi, Casillas is difficult to choose a star and yet, the title we gave to City´s midfielder David Silva who had a great season in the Premier league bringing Manchester City to the sensational titles (highlights,recap).

Silva to Man City title contribute with eight goals and 17 assists. 26-year old attacking midfielder began his career in the jersey of Celta and continued it at Mestalla (Valencia)where, since 2004. – 2010 he played a total of 155 games in all competitions ,where he add 29 goals and 40 assists.

In the summer 2010. year he moved to Manchester City for 28 million euros, becoming one of the most respected midfielders on the England. In the meantime, he played 102 games for City, enrolling 14 goals and 37 assists. For the national team Silva debuted 2006th year,and until now he has played 55 games and scored 15 goals.

What to expect from Spain on Euro 2012

Spaniards will play in the Euro 4-2-3-1 formation, and on the lawn it should look like this: Casillas – Alba, Pique, Ramos, Arberloa – Alonso, Busquets – Silva, Xavi / Fabregas, Iniesta – Llorente.

As the weakest link some will mention the defense, where will not be Barcelona´s captain Carles Puyol, but there is no doubt that Ramos will cover it just fine.

Spaniards are the current European and World champions, and thus one of the main favorites, and one can only ask the question of motivation and fatigue.

The absence of David Villa, their best attacker however they will feel, but there is also great Llorente and awakened Fernando Torres.

Watch all Euro 2012 matches of Spain from ours live stream section.