BREAKING: Here are the groups for UEFA EURO 2016!

It will be the first European championship with 24 national teams after at the past five Euro comepetitions 16 teams have participated. National teams are divided into six groups of four teams, top two from each group and the four best third-placed teams will reach the quarter-final. France and Romania will open Euro 2016 at
Saint Denis on June 10.

The program was led by former France international Bixente Lizarazu (45) and Dutch ace Ruud Gullit (53), and the two of them were assisted by other football stars such as David Trezeguet, Antonin Panenka, Vicente Del Bosque, Oliver Bierhoff, Angelos Charisteas. The Euro 2016 group draw was held at the Palais de Congres.

The Three Lions next will play vs Gareth Bale’s Wales summer while the “rookie” Northern Ireland is set to face world champions Germany in a tough group with Robert Lewandowski’s Poland.

Zlatan Ibrahimovic’s Sweden and The Republic of Ireland are in another tough Group E alongside Belgium and Italy. Portugal with the host France is in the easiest group while Holders Spain in Group D most likely with Group E are in toughest group alongside Croatia, Turkey and the Czech Republic. 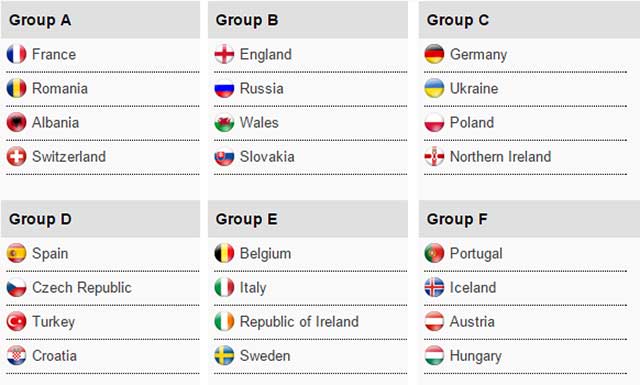 • For which third place team will play in each tie

PRE DRAW: Paris is gearing up to host the draw for the Euro 2016 finals on Saturday evening. The ceremony will be held in The Palais des Congres with UEFA chief Michel Platini not able to attend the due to the upholding of his 90-day ban as part of investigations into FIFA.