The third and last season’s “El Clasico” is played at a neutral venue in Valencia, because it is the final of King’s Cup.

Both teams enter this match at a time when there form is not in the best shape, and in particular this is true for Barcelona, ​​which again fell into crisis, thanks to which with two defeats in a row the Catalan club were knocked from the Champions League, and the La Liga title is now further after a shocking 1-0 defeat to Granada last week. 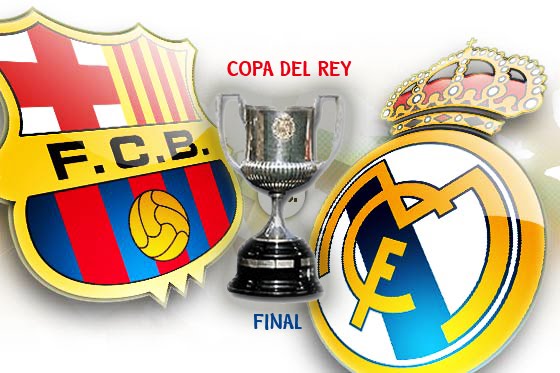 Real Madrid is in the better position and will play the semi-finals of the Champions League and in La Liga they have one point more than the Catalans. However, both El Clasico games this season, Barcelona have won. The last one played was a less than a month in Madrid and it was 4-3 for Barcelona.

Iker Casillas did has manager to keep a cleat sheet so far in the Copa del Rey competition. He broke all the records, but when Real Madrid plays with Barcelona, the Catalans always score a goal. The last time when Barca failed to score at least a goal to Real Madrid was three years ago, exactly at the Mestalla, when Cristiano Ronaldo scored a winner.

Tonight the Catalans have a one worry less, as the Portuguese due to injury will miss this game. In La liga, Los Blancos so far did not have any problems winning without Cristiano, but they were “hanging” in Dortmund to lose the Champions league semi-final. That’s whythe main question regarding the Los Blancos is , whom will Carlo Ancelotti set on Ronaldo’s place.

And while the Los Blancos are in a game for three titles this season, Barcelona lost two of them in the last two games. The fact that the first team played is even more shocking. Both games they lost with the same result, 1-0. While defeat to Atletico Madrid is not in “science fiction” area, the one against Granada is. The First Barca striker , Lionel Messi was having a poor performances in both games, but the most troubles the Catalan side have in their defense, mostly due to injuries.

“If we play well, we’ll win,” Martino told AS. “This team knows how to play well and win. We’re demanding something we’ve already seen from these players.

“I know what the fans expect from this team, but they need to understand you won’t be the best in the world every year. These footballers are a before and after in the history of this sport.

“We’ve got to get back to moments from the two Clasicos we’ve already played. The start of the last one, when we knew how to suffer and hold on. We need to recreate these moments in the match.

“I’m facing the possibility of winning a trophy with the lads. In this final I need to be part of everything they’ve given. We won in the Super Cup on the back of other people’s work. To win we need to be at our footballing best.”

From before Puyol, Valdes and Pique were out, and in the last game Busquets had to play in the last line. Now Bartra returns and Busquets will probably head into the midfield. On the other side, except Ronaldo, Marcelo is out too, but Sergio Ramos would likely return. Carvajal i Xabi Alonso return too after serving suspension.

“Winning is the collective idea, not just mine. The team has had a great Copa del Rey run and winning it would be the icing on the cake.

“It will not be easy though. It will be an exciting match, with great players and we trust in ourselves and in our way of playing. We believe that we will achieve a victory in the final.”

“The loss of Cristiano is bad, but all the players in the squad that may not be available: Jese, Arbeloa, Marcelo, Cris, is also a shame.