Football world today is wrapped in a black veil as the ex-coach of Barcelona FC , Tito Vilanova has lost his battle with cancer.Since 2011, Tito has struggled with cancer of the parotid gland, and this week his condition rapidly deteriorated and he was admitted to the hospital.

On Thursday he underwent emergency surgery for gastric complications and initial information suggested that Tito’s condition is better. Unfortunately, it was not. He was only 45 years old.

Tito played as a midfielder for 13 year, and he began his career at Barcelona, and finished it in today’s fourth league club, UDA Gramenet. In the season 2012/2013 as coach, Tito led Barcelona and won the Primera title. 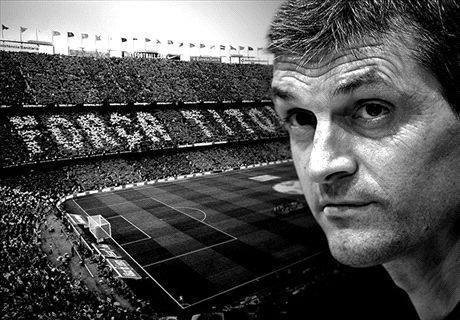 Vilanova in the 2008th became an assistant coach of Pep Guardiola at Barcelona and with him he led the team to a record number of trophies.

With departure of Guardiola, Vilanova inherited the Barca bench in year 2012, but already the very next season he stepped-out due to advanced disease. As a player he played for Barcelona B and a number of smaller Spanish clubs among which were Celta and Mallorca.

“Barcelona is in mourning. Tito Vilanova has died. May he rest in peace,” the statement said of the Catalan club: “The club expresses its condolences to the family. Members of the club, players and fans join to all who mourn. Vilanova’s family has asked for a respect of their intimacy in these difficult times. ”

At the Camp Nou during Friday will be open a space at the grandstand where everyone will be able to pay a tribute to Vilanova.

A former Barcelona coach was in surgery back in December 2012., for 10 weeks Tito was in the process of chemotherapy, and he returned in March 2013th when Barcelona FC have won the championship. Shortly thereafter, he withdrew, this time forever.

Barcelona in November 2011th, on the eve of the game between Barcelona and AC Milan in the Champions League, announced that Tito Vilanova has cancer and needs immediate surgery.

Already in December, after surgery and his rapid recovery, he sat on the bench with Guardiola during a match with Real Madrid. In May 2012nd doctors announced that Vilanova is completely cured.

In November of the same year, Barcelona has announced that the Christmas dinner will be canceled , and an urgent press conference is announced at which it was discovered that the disease of Vilanova returned and that Tito will have to temporarily leave the bench of the first team.

At the end of the year Tito was operated, and in January 2013., in New York he has passed chemotherapy and radiotherapy. In April 2013, Tito returned to the bench for the match with PSG.

Every three months, he continued to go to New York for more tests and controls, and that summer, Barca has already begun their search for a new coach. Tito in July announced he was resigning to focus on his battle with the disease.

He played in La Liga, but not for Barcelona

Three seasons he played in the second team of Barcelona, and then signed for a second league club Figueres, with whom he was on the verge of joining the Primera.

After the great games in the second division, Tito moved to Celta for which he played 26 times in the Spanish league and scored a one goal.

However in 1995. , Tito again returned to the second-league football. He played for Badajoz, Mallorca, Lleida, Elche, while his playing career as a 33-year-old Tito ended up in UDA Gramenet.

He started as a coach of Messi, Fabregas and Pique

After finishing his career Tito took over Barcelona’s U-15 team. He was a coach of Leo Messi, Cesc Fabregas and Gerard Pique.

Then he coached a lower-league teams like Palafrugell, Figueres and Terrase. In mid 2007th Tito became an assistant to Pep Guardiola at Barcelona B, which two of them in the 2007/08 brought from the third league to the Spanish Segunda.

One Season later Guardiola replaced Frank Rijkaard at the position of coach of the first team of Barcelona and Pep appointed Tito Vilanova for his assistant.

The first steps from them was to get rid off Ronaldinho, Children, and Gianluca Zambrotta, and to brought Daniel Alves, Keita and Gerard Pique. From “their” B team Guardiola and Vilanova to the first team have brought Sergi Busquets, Pedro Rodriguez and Jeffren Suarez.

From Mourinho got a finger in the eye, and avenged to him by taking the title

Tito came to the fore in the second leg of the Spanish Super Cup between Barcelona and Real Madrid. Blaugrana celebrated, but Mourinho was the “main person” that night.

During a pushing Real Madrid coach approached Vilanova and pushed his finger in the eye. The “Special one” has not apologized to the assistant coach of Barcelona because of the move, but only the Real Madrid fans.

Barca duo Guardiola – Vilanova brought fourteen trophies, and then began Titi’s era. Era, which is due to disease returning unfortunately only lasted one season, a season in which Tito over Mourinho led FC Barcelona to the league title.

After a return of his illness , on the recommendation of a doctor in the summer 2013th year, Tito left the position of the coach, and earlier had a misunderstanding with a mentor, Guardiola.

When I came to treat my illness in New York, Pep visited me after a few days, but never again. For two months I was alone, and he has unilaterally decided that it is better that we dont see each other anymore. Pep was my friend and in my worst period of life, and when I needed him , he wasnt there ” discovered then depressed Tito.