After glorious years in which they won the titles of  Champion of the World and Europe, the French with Raymond Domenech hit the bottom, although they have a very strong team. Since Laurent Blanc came to the helm , things started to move on better.

Far from that , the European Championship qualifiers they passed smoothly, and the initial defeat from Belarus at home was a big shock. 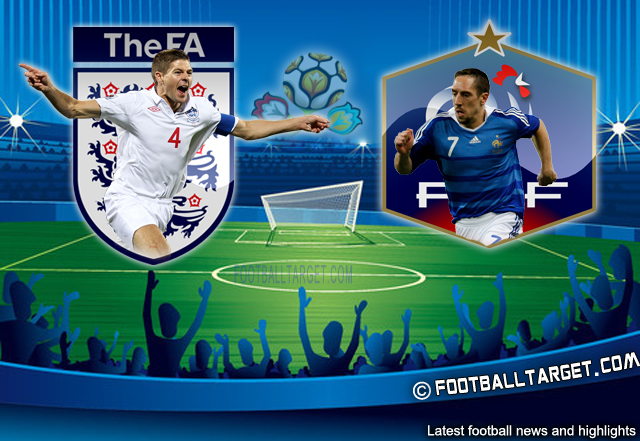 But from this, 3rd September 2010. until now, the next 21 games, the French have not lost. In preparation for this championship French shown why are they one of the biggest favorites here , when they achieved four victories among which are the one against Germans in Bremen.French unbeaten run perhaps is a sign that Lauren Blanc is on track to return the France on the slopes of the old glory.

England has passed qualifications on a superior way, but for the long time they have not manage at major competitions to achieve something bigger.

Minus to them is the mess around new coach, Roy Hodgson who has been appointed to the helm of the team just over a month before the Euro. The competition begins visibly handicapped, and the best England player Wayne Rooney first two games due to red card will not play.

Otherwise, in the past decade these two teams have met just three times, and always as the winner came out France.English were particularly disappointed with last encounter, when they at theirs Wembley were defeated with 2:1.This was the start of the wining path with Laurent Blanc at the helm of France.

Obviously this great player even with the transition into a coaching “waters” maintained that winning mentality, which this selection somehow lost after the departure of one generation, led by Zidane, and thus they properly embarrass themselves on the last Mundial. This qualification for the Euro 2012,French started with an home defeat from Belarus.

But then came Blanc, who made a series of six wins and three draws. French as the first in their group achieve placement in Poland and Ukraine, and what is truly interesting is,that in the last four friendly matches they have shown excellent form and celebrated over Germany, Iceland, Estonia and Serbia.

Because of this fact the French apply for the biggest favorites in group D for the passage into the next round, and if they succeed in it, probably they could avoid in the quarter-finals “Spain”, and ultimately they could go very far.

Of course this at all would not be some surprise, because “Tricolor´s” have a lot of quality players, in which certainly the biggest stars are Ribery and Benzema, but also the rest of the offensive team behind them has a very good season.

Regarding to the midfield, there are untouchable Cabaye and M’Vila, who however got injured in the recent friendly match against Serbia, but according to latest information, he would still be ready for a match with the English.

On the other hand, so lucky were not right sideback Sagna, defender Kaboul and striker Remy, and they will miss due to injury this European competition.

Just as Frenchmen, and Englishmen in the last two friendlies before Euro 2012 have celebrated victories, and that against solid teams , Norway and Belgium, but their game in those matches was far from ideal, it is extremely worrying for theirs fans

However, they have two reasons to justify it, and the first is related to the new coach, Hodgson, who has only a month and a half before took over this team, while the other is much more important and refers to the incredibly large number of absences from the first team.

In fact, earlier have fallen due to injuries defenders Dawson, Walker and Smalling, midfielder Wilshere and striker Bent, and the few days before the start of the European competition,the same situation occurred and to safe starters Barry and Lampard.

In the meantime, on minor injuries have complained and another midfielder Parker, and defender Cole, while striker Defoe after the death of his father immediately has traveled to England, so the coach Hodgson will really have a hard time to compose first lineup for the match with France.

When we add also the fact that in this, but also in the forthcoming meeting with Sweden, Rooney is not eligible to play due to cards suspension, then, big question is what such a selection can actually do on Euro 2012.

However, persistent England we must not write off, especially if they are maximally concentrated in the defense, where still they have very good players, and the attack can also be extremely dangerous over fast-footed Walcott ,Young and their captain Gerrard.

Prediction : We have already highlighted during the analysis the problems with the English are facing on this European competition, so against the strong team of France, they should be happy with a draw, while on the other side “tricolor ” in the first round will be looking to justify the role of favorites in the group D.France to win.
However, the importance of this match could lead to something more defensive approach of both teams, so the match under 2,5 goals is also very certain.