Finally a long-awaited big day has come. Euro 2016 competition in France reached the last stage, the big final in which the hosts, France will play against a team which surprised many, Portugal and Cristiano Ronaldo.

The first European Championship with 24 teams participating came to the end and there is still to play the big final game. Opinions over whether the “expansion” of the number of participants was a good move are still divided, it is evident that new kind of competition brought some big surprises and in the final we watched some outsiders, such as Wales or Iceland.

The Portuguese maybe were favorites from the shadow and did not impress so far as only in the semifinals Santos’ men managed to win in the regular time of the game, but neither team so far outplayed them as Ronaldo and company were tactically nearly perfect.

The French at the very beginning had some problem and were visible nervousness, but as the championship progressed they were getting better and better, which the last two games proved. When it comes to mutual encounters between France and Portugal, the French were absolutely more successful, beating Portugal in the last ten matches. At major competitions these two teams have not met since the World Cup in 2006 and then in the semi-final France won with 1:0 result, the same as in the friendly match, last year.

When we take a look at the recent past it’s clear that Portugal at the big competitions is leaving a good impression. This is the sixth consecutive championship at which they are qualified and have always played at least the quarter-finals, while there are two semi-finals and a final in 2004 which they as hosts lost. Many don’t like the anti-football which Santo’s men are playing, but their tactical ideas and approach is on the high level. Still it have to be said that in the group stage the Portuguese were one of the teams with the highest number of shots on goal.

Portugal ended the group stage as the second placed team, without any win, with three draws. In the round of 16, against the Croats, Santos’ men have many problems, but their defensive tactic with somewhat luck brought a result, as Quaresma three minutes before the penalty shootout has scored for his team. It was the only shot on the goal for Santos’ men.

A game later, Santos’ men have played against the hot team, Poland. Another game which was decided after the regular time, this team even after an extra-time, on penalties. In the semi-finals Santos’ men have got one of the most pleasant surprises at Euro 2016, Wales. It was the only game for Portugal where Ronaldo and Co. have managed to win in regular time.

Pepe missed that game and for the final one he could be out as well. Other injury problems Santos doesn’t have and most likely he will not make any big changes regarding the starting lineup and tactics in which his team is playing without a real striker so Ronaldo who already broke some records and is on hunt for more, will play as the false n.9.

This championship once again showed how the French are powerful when they host a great event, and in the recent past have not made a wrong step. At the European Championship in 1984 in front of their supporters they’ve lifted the trophy, as at the World Championships in 1998 also, with another European title at the championship held in Belgium and the Netherlands in 2000. The last good result for the Les Blues was the final of World Cup in Germany in 2006 when Italy took the title.

Now they are back in the final, and again at home, and of course they want to continue this brilliant series of winning trophies in front of their fans. Didier Deschamps’ men didn’t started as many were expected and they’ve had many problems in the group stage already, when only in the last minutes of the games they’ve managed to snatch wins (against Romania and Albania). Against the Swiss they’ve played a draw while against Ireland in the last 16 stage after going behind early in the game with Griezmann’s double in space of just 5 minutes, they’ve won the game.

Another good surprise of this Euro 2016 competition, Iceland the French have smashed already in the first half and ended the game with final 5-2 result. The most serious team, which France have encountered was Germany in the semi-final and Deschamps’ men have “the exam”, although it can’t be said that they were dominant side on the pitch. They’ve used a gifted penalty at the end of the first half and then wisely waited for their chances from the counter attacks and from one of such they’ve sealed the final 2-0.

France is the most effective team of the championship with 13 goals scored, of which nearly a half was a work of Griezmann, top scorer of the championship. At five games they’ve scored at least two goals, while against the Swiss with a combined composition match ended without any goals. Head coach Deschamps has no injury problems in this championship and the only change for this game could be if Deschamps decided to put back Kante and Rami into the first team. 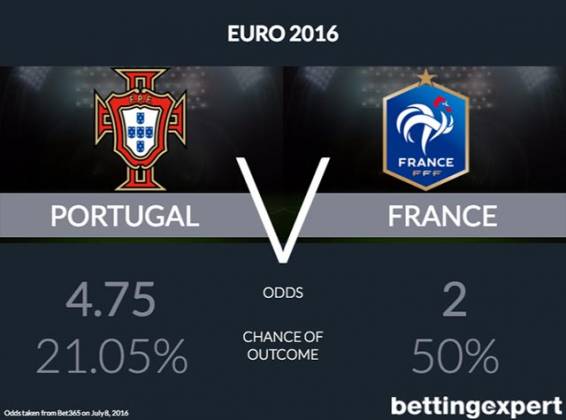 In the final, we have two undefeated teams, but here they’ve came in completely different ways. Portugal have played mainly hard matches and celebrated with hard wins, while the French have scored a lot of goals and they did not play any extra time or step to penalty shootouts. France are favourites among bookies to take another Euro title and history suggest the same. France to win Euro 2016 trophy.