Video : Mourinho on his knees: Bayern Munich in the Champions League finals!

Related Posts
You are here
Home › Champions league › Video : Mourinho on his knees: Bayern Munich in the Champions League finals!

After a shocking roulette penalties Bayern Munich placed in the Champions League final, becoming only the third team in history that will have a chance to play finals at home. There will face another the big surprise this season, London’s Chelsea, who is in two games better than favored Barcelona. Great Jose Mourinho so has lost his fourth semifinal most esteemed club football competition of the world, and the tragedians of the royal club were Ronaldo, Kaka and Sergio Ramos who missed penalties. 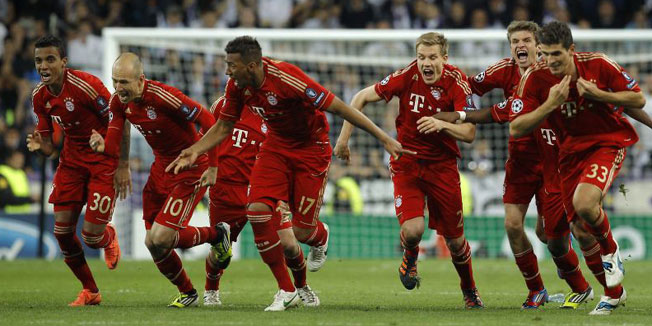 And while Chelsea went to the finals in a rare as seen game of cat and mouse, at the Santiago Bernabeu we watched diametrically contrary a duel. Two powerful teams collided at glittery Madrid’s stage and opportunities and are bursting with beautiful moves in all directions. Indicative was the fact that in the first half hour both teams make a an incredible total of 14 shots on goal. However, it is evident that El Clasico quite spent Mourinho’s players, and as the meeting progressed, more and more resembled the one on the Allianz Arena where Bayern midfielders good part of the game were better. Mourinho has tried to save the situation with late subs when he sent Granero and Kaka, into the fire,but it did not make much difference. The Bavarians finally had superiority in possession and opportunities, and the overall impression is that in the two games were the better team.

CR7 can not all alone: Ronaldo was brilliant to the penalty shootouts

While Lionel Messi slept three most important games of Barcelona , Cristiano Ronaldo has shine in the best possible way. First, CR7 scored winning goal in El Clasico, while in the second leg match against Bayern Munich was the scorer of both goals of the Royal club.Almost alone he was playing against Bavarian giants. Ronaldo scored the ninth and tenth goal in this season edition of the Champions League, and reach astronomical total of 56 goals with 16 assists in 51 meeting for the team from Santiago Bernabeu. Statistics is, what from today’s perspective except Lionel Messi, rarely someone can repeat in the next ten years.

While the extra time were soporific and truly exhausting, penalties have brought real drama. It’s amazing how the other pair of the best players in the world Cristiano Ronaldo missed crucial penalty. Intriguing is that neither Messi nor Ronaldo have nerves of steel. After a miss Ronaldo and Kaka with Bayern led 2-0 but then Casillas brilliantly harnessed Kross and Phillip Lahm shots. Mourinho then knelt on the grass, and Sergio Ramos sent a ball into the clouds. Mourinho Realized then, finally glorious Gary Lineker statement ” Football is a game where play 22 players,and German´s always win. Schweinsteiger score , and unbelievably celebration followed at the Santiago Bernabeu pitch, and the streets of Munich began.