In the second semi-final match of Euro 2012, which is scheduled for play this Thursday night in Warsaw, strenght will weigh big rivals Germany and Italy.It is interesting that just as Portugal and Spain, and those two teams in the first part of the championships played in groups B and C, where the group stage they have ended without a single defeat. 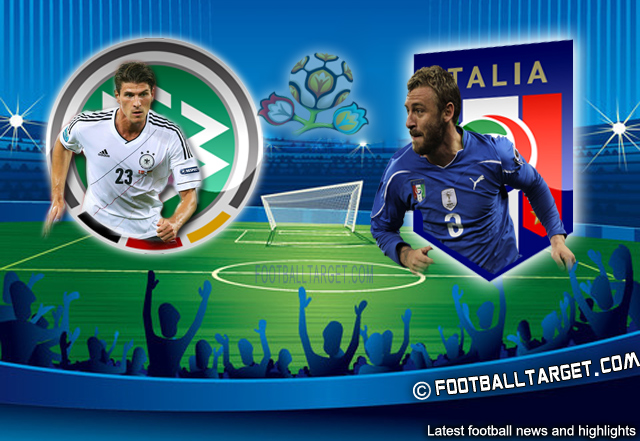 Otherwise, it is interesting to note that in four of their mutual encounters played in this century, the Germans have never celebrated, while Italy recorded three victories, of which the most important was the one six years ago in the semi-finals of World Cup which was played in Germany .Since than Germans have changed a lot of things and found they winning formula.

And to make things even worse, the hosts these two goals have conceded in the last minutes of the second overtime, so that now definitely Germans have a huge motivation for the revenge .

Just over a year ago in a friendly match,these two national teams have played 1:1, but even then it was obvious that the Germans have a much better and more talented team, which has now become something more experienced, so that many even before the beginning of the Euro this selection named as one of the biggest favorites for the title.

Germans footballers on some way justified that in the group stage, because they were the only selection that has recorded all three wins, but still coach Low was not too thrilled with performances by some of his players, and in the quarter-match against Greece on the pitch has sent three new players , attackers Reus, Schürrle and Klose.

However, in the first 45 minutes it’s not proven to be a good move, because they only once manage to scored, and when Samaras in the 55th minute sensationally equalized to 1:1, then this offensive experiment seemed as complete failure.

But then the Germans thrown into gear up, and in just 13 minutes they three times managed to checkmate Sifakis, which even the second goal that they concede from the penalty has not managed to spoil their celebrations.

However, against the traditionally strong Italians they will certainly have a much harder job, and it is expected a return of Gomez and Podolski in the first team, while only young Reus should retain his position, given that his predecessor, Muller, did not really show some great form at the Euro 2012.

Unlike the Germans,the Italians with much more trouble get to the semifinals, as in the group stage in the first two games against Spain and the Croatian they have won just two points, but in the decisive third round, however they were up to the task and beated the Irish with 2:0.

Then in the quarterfinals theyfor the opponents the English, and as expected this match was very tough and uncertain, and finally the penalties decided the winner, were Italians showed more composure and with a score 4:2 accrued equity in the semifinals.

However, here we must add that this victory of Prandelli´s players was entirely deserved, as in the regular game, even in the overtime, they proved much more than England, but did not have enough luck to score from their chances.

Otherwise, Prandelli in this match with England set the formation like in the match with the Irish 4-4-2 formation, which looked much better than the on from the first two rounds, when Italy was played with three 3-5-2 formation .

However, for this step Prandelli was somewhat forced, because due to injury was left without a reliable defender Chiellini, which Bonucci replaced very well.

In the match with Germany ,Prandelli is again faced with problems in that last line, since they are easily injured defender Abate and polyvalent de Rossi, while Maggio has no right to participate because of two yellow cards suspnesion.

Therefore, it is expected that this position on the right side will cover young Ogbonna, while in the midfield should again get the chance Motta.

Prediction : Just as in the first semifinal match and here we have a favorite, and it is selection of Germany. If Germans can play like against Greece they will likely reach the finals with Spain who beated Portugese in the first semi-final match (Highlights : Spain – Portugal)without any problems.Germany to progress further.Good bet here is also over 2 goals.