In the historical first season in the German top league Bundesliga, for Greuther Fürth not including the period before the Second World War,already in the first match brought them big German giant,Bayern Munchen. 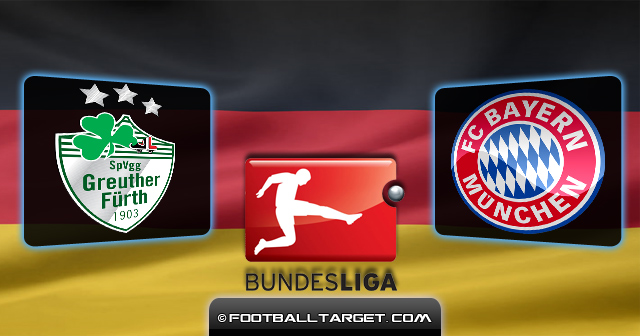 Greuther Furth in the last season was terrific while playing in the second league,and on superior way they won the first place,having the best defence in the league.

They couldn’t get heavier opponent for their debut match in the Bundesliga , but also even more spectacular for their fans. Best possible debut would be of course for them be the eventual victory over Bayern Munich and certainly will not lack any motivation. Quality probably will, because it is more than clear that at this time individually they are not even close to the Bavarians.

Besides, neither their form obviously is not at the same level as in the first round of the Cup they were defeat from Kickers in Offenbach by 2:0. Very poorly they have played in that game and also they shown great anxiety, so they ended that match with two players less.

The defense has being unsure, but did not suffer major changes this summer,but as for the attacking part of the team,they lost their first scorer Occéan who scored 17 goals and enrolled 9 assists in 30 appearances for Furth , while in the Cup did not perform Djiby Fall, the attacker, who was brought in, as a replacement for Occéan from Lokeren.

Against Bayern Munchen,Djiby Fall will play,that is sure, while Noth will move to the bench. Schmidtgal should take place on the left flank, and reinforcement from Leverkusen Petsos in midfield. None of the major players is injured.

It’s hard to tell whether are happy or not at Bayern to play the first match as the guest against rookie in the league, because opponents will be maximally motivated, but Bayern’s players are already accustomed to the fact that all teams against them “bite” and have a special desire to win.

After all, Bayern has such a strong team that simply has to win in games like these.They started the season well, as they won the Super Cup, against the team’s biggest rivals, Borussia Dortmund with a 2-1 (Match video highlights), thus won the season’s first trophy. In the first round of the Cup ,they easily defeated second division club Regensburg with 4:0 (Highlights).

Coach Heynckes after the Super Cup made just one change in the lineup. Defender Dante has finished on the bench and Badstuber replaced him on the field.

Otherwise, when it comes to signings, striker Mandzukic has shown the most, as he scored a goal against Borussia and assisted for another, while against Regensburg he has scored two more goals, and so on the best possible way changed injured Mario Gomez.This summer Bayern brought two more players,Shaqiri and Pizarro ,and they both played in the cup match against Regensburg,and they have both scored a goal.

Against Furth from new players among the starters will be only Mario Mandzukic and it will be the same team that ran in Regensburg. Still, apart from the aforementioned Gomez, on the list of injured players are Rafinha, Contento and Alaba.

Prediction : It is clear that absolute favorite here is Bayern, but we should be a little cautious because it is start of the season,and the Bavarian giant the last season began with deafeat.Home team will be extra motivated for this match,and they could score a goal,but then the match will be open,so the best tip to take here is over 2,5 goal (or Bayern Munchen to win).