Argentina entered their second World Cup 2014 win with a minimum 1-0 over Carlos Queiroz’s side , thanks to Lionel Messi who 91st minute stunning strike which sealed the last-16 place for Argentina. 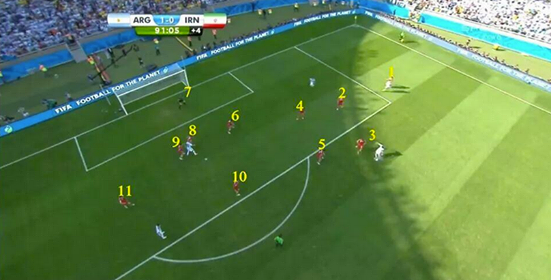 Many expected that Argentina led by many football stars would have an easier job against Iran, but only in the injury time the South American side came to a win. For most of the game Argentina were attacking, and Iran defending with eleven players behind the ball, which proves to be a hard tactic for Argentina to break.

“We do not play the way we are capable of, but I think we’ll catch the shape over time. We are the first that know that we do not play how we wanted. Today we had a problem because Iran has played very defensively, and it was hot,” said Messi after his second goal in Brazil.

In the last few minutes, Iran had a chance even to make a big sensation, but Romero saves the shot. A minute later, finally, Argentina scores thanks again to their captain Lionel Messi , who’s with a stunning strike outside the box and with the whole team of Iran in front of him, sends the ball into a goal.

With this win Argentina have sealed their place into the last-16, while Iran would need a two goal difference win against Bosnia & Herzegovina and hope that Argentina beats Nigeria in the last match.