Stadion Miejski — Poznań
Match : Italy vs Croatia Preview,Live stream,Prediction
Referee:‬ H. Webb‎
After the first round where Croatia celebrated against Irish and the Italians drew against first favorite Spain, now these two selection wil play and for sure look for critical points for the passage further. Italy certainly can allow themselves to lose this match , considering that it probably meant a farewell from the Euro 2012. 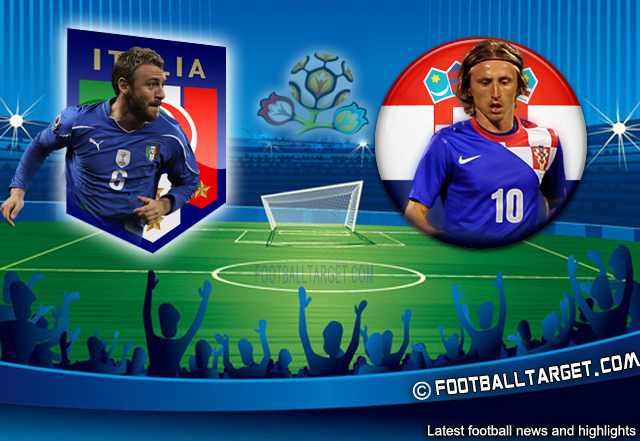 On the other hand, the Croats with the new three points would already verified placement in the quarterfinals and then in the final round they could play without any pressure against the Spaniards, but in the case of the defeat from Italy match against the current European and world champion for Croat´s would have been decisive, and they dont want that scenario for sure.

Otherwise, these two selections in the 21 century, have met only twice and both times it was Croatia who celebrated. Once at the World championship in Japan and South Korea in 2002. year, and then four years later in a friendly match in Livorno.

Of course this information will only be an additional motivation for the Italians, who, otherwise at this championship came in the shadow of another match-fixing scandal in the domestic league, so many were skeptical about their performance on the Euro 2012.

However, an experienced expert Prandelli insisted that it does not impact too much on his chosen ones, which proved to be completely accurate in their first duel with the favored Spain, because they played a very good game and finally won the big point.

Specifically, Prandelli on some way surprised his colleague on the other side with one unusual formation, 3-5-2, and especially it was good their performance in defense and increased midfield.

Attacking duo Balotelli-Cassano was not too dangerous, so it’s already in the 56 per minute instead Manchester City striker entered experienced Di Natale which proved to be a big hit, because this player just four minutes later, managed to checkmate Spanish goalkeeper,Casillas.

However, their celebrations lasted only five minutes, considering that on other side managed to score Fabregas, so by the end of the match,the Italians generally try to play one calmer game to ensure at least one point.

Now, ahead of them is a very difficult match against the “energetic” Croats, who have shown great offensive game against Ireland, and it is precisely because of it,this time Prandelli will little change his tactics in relation to the match with Spain.

This means that De Rossi could return in the midfield, while on sideback positions should play somewhat defensively oriented players like Abate and Balzaretti, whose main task will be to stop the dangerous atacks pf Perisic and Rakitic. Also, in an attack that Di Natale should get priority over Balotelli, who has already proved too much nervousness and uncertainty in the first round.

Also, in an attack Di Natale should get an advantage over Balotelli, who already has shown too much nervousness and uncertainty in the first round.

We have already said in the introduction that the Croats in first round came to a much desired three points against Ireland, but here we still have to add that their game was really at the elite level, especially in the offensive part, where they were extremely mobile Mandzukic and Jelavic.

It was this duo, who scored all three goals for Croatia, but perhaps the key player of this team was a great playmaker Modric, who completely controlled the game in midfield, while the excellent work on the wings have done Rakitic and Perisic.

When we add the standard and dangerous team captain Srna, who on the right side was perfectly complemented with Rakitic, then it is quite clearly that the Croats in no case could lose this match.

In fact, in moments when the Irish manged to equalize to 1:1, coach Bilic footballers did not lose their heads, but they continued with the constant attacks against the Ireland goal and goalie Given.

On the other hand, the Croatian defense once again proved to be not too safe, and it will definitely be their biggest problem in the next two matches against Italy and Spain.Slaven Bilic does not have too many quality options on these positions, but it will have to somehow compensate with a responsible play in midfield.

Altogether, compared to a match with the Irish should not be any change in the first team, so therefore the Croatian formations remain the same.

Prediction : As both teams in the first round provided good games, in their mutual match will certainly be very interesting to see for which tactics their coaches Prandelli and Bilic,will decide, but we still think that this might be a hard match in which nobody does not want to lose, so therefore should be a little less work for the goalkeepers Buffon and Pletikosa.Under 3 goals.

Watch match Italy vs Croatia from ours live stream section