You are here
Home › international › Preview : Italy vs France Friendly

Friendly match between two big European teams, Italy and France, which otherwise 2006th have played in the World Cup finals in Germany, where after penalty shootout Italy have celebrated ..

After that, in the qualifying for EURO 2008. they were together in a group, where the French have celebrated at home, while in Italy the match has ended without any goals. Their last encounter was at the same Euro 2008 when Italy was better with 2:0. 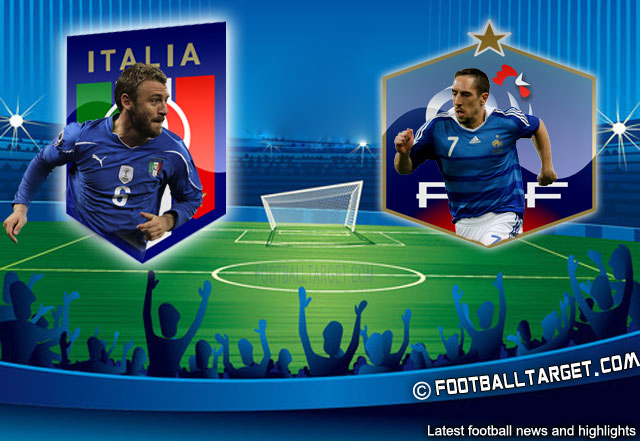 But since then the game of Italy national team have changed radically , especially this relates to the period since coach Prandelli has taken them.

Prandelli has significantly rejuvenated the teams selection on the last Euro 2012 In Ukraine/Poland, and the result of it was their way to the Euro finals.Sadly for them, there the Spaniards have awaited ,and they were simply too strong and in the end have celebrated with 4-0.

But this has not distracted Prandelli from his purpose to make a modern and aggressive team, but still strong enough in defence, which should eventually bring them the first place in qualifying group matches for World Cup in Brazil 2014.

However,they have opened the group with a 2-2 away draw against the Bulgarians.The next was an easy win against Malta at home,and against Armenia away,but perhaps the most important was the victory against the Danes 3-1.

With those results the coach Prandelli certainly is happy,but now for the match with France,he will probably be more focused and on defence,so probably a formation 4-4-2 will be back for this game.

Anyway, for this meeting due to injury does not compete striker Borini, while experienced midfielder De Rossi did not even get a call for unsportsmanlike behaviour in the last round of Serie A.

The French after an average performance at this year’s Euro competition, where they were relegated in the quarterfinals from the later European champion the Spaniards,have decided to end the cooperation with coach Blanc, while at his place was appointed Didier Deschamps.

From him was expected to bring some changes in the tactical scheme, but also the regeneration of team, while at the same time he had to keep under control, and some of its biggest stars, which not so long ago have expressed their dissatisfaction with the work of the French national team.

It is obvious that for now he is successful, because in the first three qualification matches for the World Cup he has won seven points, with victory in Finland and Belarus at home, while in the last match a month ago in the big derby in Madrid, thanks to the goal which has scored Giroud in the last minutes, he managed to get to a big point against the favored Spain.

Of course that this draw now will even more boost the confidence of Tricolors ahead of the qualifications, but also in front of this match with the Italians.Due to injuries will not compete Chantome midfielders Chantome and Nasri, and great striker Benzema, so Giroud this time will be alone in attack.

Match Prediction : These two selections have always been known for its defense, so that this time no matter that both teams have a large number of outstanding individuals in their ranks, they should not rush too much ,so the option under 3 goals is the most realistic.

The next two tips for this match would be the first half or the full match draw as well as the both teams to score.

Watch Italy vs France online from our live streams section