The first days of the Spanish football coach Rafael Benitez at Chelsea bench are definitely not easy ones. Former Liverpool coach definitely could not even dreamed that the club´s captain John Terry will turn his back to him…

After the weekend´s match against Man City when Benitez by fans was greeted with cries “Only one Di Matteo” and “We do not want you here,” as well as numerous others to support a former coach Roberto Di Matteo, team´s captain John Terry has decided to show once again how controversial is he.

John Terry on the training appeared in Chelsea jersey with a small number 16 (jersey number of Terry is 26), a number which Di Matteo was wearing as the player of Chelsea and Italy. 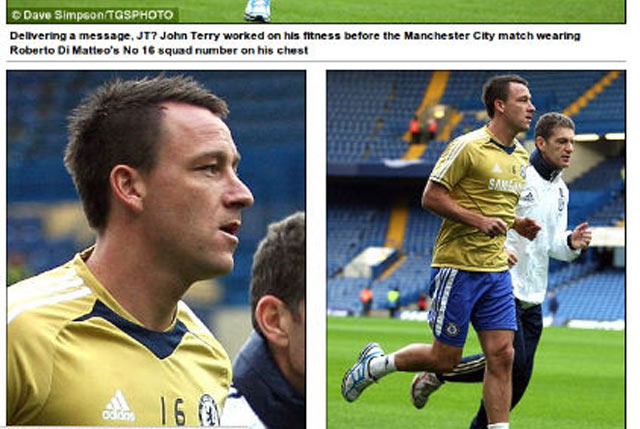 Screenshot: Daily Mail
As is well known after his defeat against Juventus (0:3) in the fifth round of the Champions League, by which Chelsea came to the brink of falling out of the competition, Di Matteo was sacked, and on his place came at Stamford Bridge disliked Benitez.

Whether John Terry wanted just to express with this a support to his former coach, or he wanted to show his disapproval of the new one,Benitez ?