This Saturday bring us a very interesting match of the Italian Super Cup, and for this trophy in the distant China, Beijing, will fight the current champion of the Italian Serie A Juventus and last year´s winner of the National Cup Napoli, who othervise up to this trophy came just with the triumph over the “old lady” of 2:0.( Juventus – Napoli Cup full highlights) 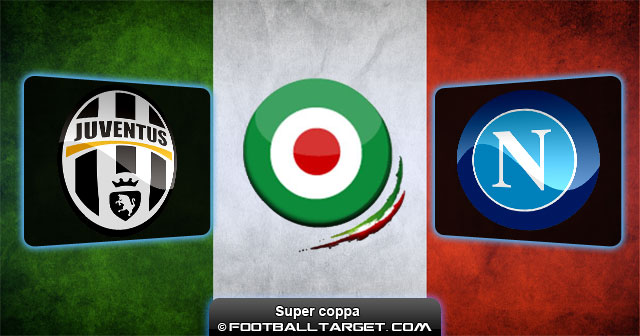 However, in the Italian championship Juventus was much better and have won at home with high 3-0, while meeting in Naples have ended without a winner, but with six goals scored.

However, the “wounds” from that defeat in the Italian Cup are still fresh, so that the current champion Juventus will for sure play with more caution, especially since is the very beginning of the season and certainly would love to go in the start of the new season with the new trophy in their hands.

The last season Juventus on superior way raise the title,where in 38 matches which they play they havent lost any single one of them and they concede only 20 goals.

Also, only the second place team AC Milan, which they left in the end at the four points of difference, have scored more goals than them, so the fact is they have shown their strength on this field as well, especially playing at home.

Of course in this section we have to mention the great contribution of their coach A.Contea, who before the start of the last season came from Siena, and somehow along the way made an excellent blend of youth and the experience, but , during this summer he was under scrutiny for involvement in match-fixing scandal, and eventually even sentenced to 10 months of suspension.

Since it is not yet known who will replace him in this period, in this Supercup match his assistant Alessio,will led the team from the bench which means that nothing significant will change in the terms of tactical formation.

For the end we may say the during this summer transfers window Juventus have brought experienced defender Lucio from Inter Milan, then the midfields duo from Udinese, Isla and Asamoah and young Pogba from Manchester United, while the new names in the attack are Giovinco (who came back from the loan) and Boakye from Genoa.

On the other hand, the team have left the players who have not managed to impose in the past year, and we’ll point out midfielder Krasic , Elia and legendary Juventus striker Alessandro Del Piero.

Unlike Juventus, behind Napoli is a very turbulent season in which they played after a long time in the Champions League, and achieved some great results in the group stage, but in the eighth finals the current champion English Chelsea have knocked them.

On the other hand, in the championship in some way they have failed because they only finished on the fifth place, but they compesate that a little by winning the Italian Cup, and exactly over Juventus, causing them the first defeat in the season. ( Juventus vs Napoli Cup match recap and highlights)

Regarding the current state of the team,it might even be slightly better than last year, despite the fact that great striker Lavezzi was sold to PSG, and the have left the defender Fideleff, while at the San Paolo have arrived two very high quality players from Fiorentina,defender Gamberini and midfielder Behrami.

Also, from the loan at Pescara returned one of the best scorers in Serie B last season, the young Insignia, while the leaders of Napoli certainly an excellent job have made witha definitive purchase agreement of the two attackers who last year performed as borrowed players, Pandev and Vargas.

Check out the match highlights and full match video as soon as the match finish.