Liverpool starlet, The 26-year-old Luis Suarez has committed his future to Liverpool by signing a new long-term contract, which certainly would bring joy to Reds’ fans. 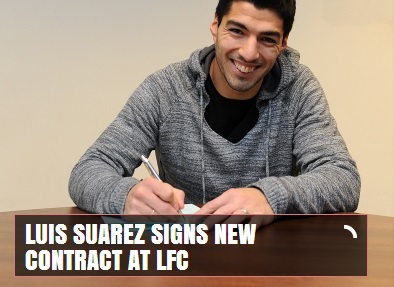 Although this summer, Suarez wanted to leave Anfiefd and even tried to force his move out, four months later Suarez gave the best possible Christmas present to Liverpool fans by signing a new deal with which the Uruguayan has become the highest paid Liverpool player of all time (£130,000 a week), having a wage close to Real Madrid duo Cristiano Ronaldo and Gareth Bale.

“I am delighted to have agreed a new deal with Liverpool and have my future secured for the long term,” said Suarez.

“We have some great players and the team is growing and improving all the time. I believe I can achieve the ambitions of winning trophies and playing at the very highest level with Liverpool. My aim is to help get us there as quickly as possible.”