As far as derby’s go, there are few which match the Manchester derby. But in recent years it has been taken to a whole new level, with City now challenging their city rivals for domestic and European honours. Games in the Premier League don’t come much bigger than this. Given that both teams haven’t made the greatest starts to the new season, there is a lot riding on the game at the Etihad for both managers as neither wants to fall behind the leading pack. With both teams sitting on 7 points, 2 wins, 1 draw and 1 lose, it’s going to be a tight game to call.

Both teams come into Sunday’s fixture high on confidence however after great performances by both sides in the mid-week Champions League games. Moyes will be extremely happy to see Rooney hit top form again with a spectacular display against Bayer Leverkusen, and Rooney relishes games such as this, scoring 4 goals in his last 3 trips to the Etihad. One more goal here would see Rooney become the highest ever goal scorer in the Manchester derby. Equally Pelegrini can be pleased with City’s 3-0 win at Plzen, albeit they should have scored a lot more than they did.

Manchester City could welcome David Silva back to the squad as he hopes to be fit after recovering from a thigh injury. Micah Richards is fit to feature after overcoming a hamstring problem, but the same issue is set to keep Gael Clichy out of the fixture.

As for United, Danny Welbeck remains doubtful with a knee injury. Phil Jones and Rafael are also set to miss out with ankle and hamstring injuries respectively. Kagawa will be looking to keep his place in the United team, but Ashley Young an Nani are both pushing him to start the derby. 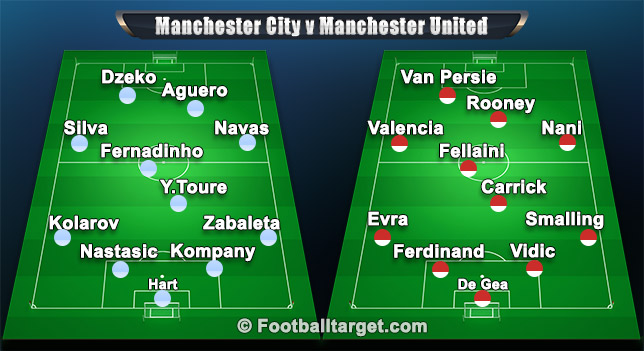