The Slovakian international MARTIN SKRTEL has ended all doubts about his future after rejecting Inter Milan’s offer and agreeing to sign a new contract with Liverpool. 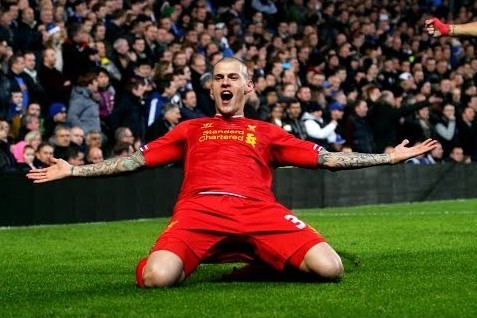 Despite rejecting to pen a new Liverpool contract earlier which was “unacceptable” to him, Skrtel who was set to leave the Reds have turned down the chance to sign for Italian side, Inter Milan where he could play with Man Utd’s former defender Vidic.

The 30-years-old centre-back has opted to remain at Anfield and to commit his future to Liverpool by agreeing to sign a new three-year deal.

“I confess that there were not mere rumours, the interest from Inter was real,” Csonto (Skrtel’s agent) said in the Liverpool Echo. “The deal did not go ahead, but there was contact made.

“The player had been thinking about his future and eventually opted to remain at Liverpool.”

Skrtel joined Liverpool from Zenit St Petersburg back in 2008 and since then he has made 212 Premier League starts for the Reds who start a new Premier league season 2015-16 at Stoke City.

To recall, Liverpool so far have agreed deals for James Milner, Danny Ings and Adam Bogdan while with Sterling on the move Brendan Rodgers is planning to invest some money from Sterling’s transfer to sign more players, before all the Reds will need a new striker as Balotelli failed to prove his talent at Anfield, while the 18-year-old Charlton defender Joe Gomez is set to sign for Liverpool in a €4.9 million.