The Argentinian magician Lionel Messi is delighted with the European Golden Boot prize.

Messi has scored the most goals of any player in Europe competitions last season, and also he has beaten Real Madrid´s Cristiano Ronaldo by just four goals.

Barcelona forward Lionel Messi has taken some time and thanked to his teammates for helping him to win another trophy , after winning the 2011-12 European Golden Boot. 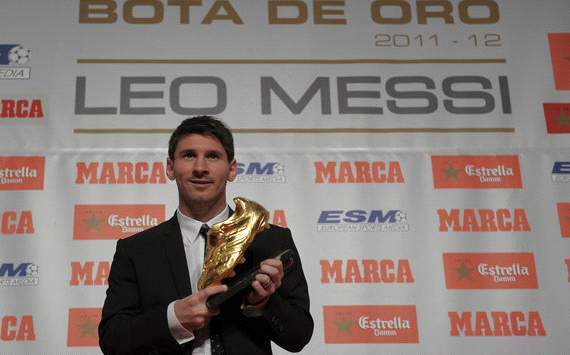 ”It is a prize for scoring goals, but without my teammates I couldn’t have scored them,” he humbly told reporters.

“I am happy to win my second Golden Boot,” he said. “Although individual trophies are not what I compete for, I play to win team trophies.”

“I’m grateful to Barcelona for what they’ve done for me. My dream is to end my career at the club, before returning to Argentina,” Messi added.

“Messi Golden Boot? I don’t think we’ll ever see another player like Leo. Mainly because of the way he understands the game,” he praised.