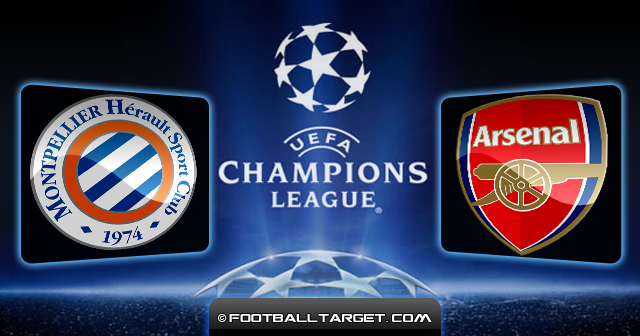 Champions league group B bring us the meeting of the “rookies” from France,Montpellier who will make their debut in the Champions league and a regular participant in this competition, English Arsenal, who last year finished third in the Premier league.

Otherwise, these two teams so far have not played against each other, and certainly, this match will be one big emotional experience for the France striker Giroud, who this summer from Montpellier has arrived at Arsenal.
In fact, last year he was the first scorer of Ligue 1, which also has been his best recommendation to move to London and how he actually meant to Montpellier shows the start of a new season in which Montpellier does not provide the games like the last season, when he came to his first title of champion of France.

Even though the coach Girard claims that from Giroud´s leaving team wont suffer as there is still a lot of quality players in attack, it was not proved to be accurate, because Montpellier after the first five rounds takes only 16th place with just four points won.

It actually means that until now they managed only to win points in two matches, in a guest appearance at Sochaux where they celebrated with 3:1 and in the first round when they drew at home with Toulouse.

In the remaining three matches they have experienced the away defeat from Lorient and Reims and at home from the current first placed team,Marseille.What also attracts attention is the fact that in every game they conceded at least one goal, while also their attackers failed to score in only one meeting,against Marseille.

Here we must add that in the opening of the season they have suffered a defeat by Lyon in the Super cup, after a penalty shoot-out while in the regular match they conceded two goals.

All this leads us to think that against Arsenal they will try to play attacking football, because they are aware that they have a lot of problems in the last line, which then can be compensated only with good perform in the attack,Mapou Yanga-Mbiwa and Remy Cabella will be back for this match after they were rested the last game.

As for Arsenal, they have also opened a new season a bit disappointing, because they have played at home just 0-0 against Sunderland, and in the second round on away game against Stoke they drew again.

These two games once more have confirmed that the “Gunners” just like the last year, will need some time to work few things out, especially in the offensive part of the team, which is in fact experienced the biggest changes during the summer.

Certainly the most important of them is a leaving of the top scorer from last season, van Persie, while on the other side to these positions they brough Giroud and Podolski, which only in the third round of the Premier League delivered some concrete results when the “gunners” on a away game against Liverpool celebrated with 2:0.

Otherwise, in that match his debut in the Arsenal jersey recorded just Podolski, while the second goal was the work of another novice Cazorla, who was actually brought in to replace the Alex Song who went to Barcelona.That coach Wenger is doing great work and has started to solve all the puzzles for the Gunners correctly,was seen in the last round when Arsenal at home sunk Southampton with 6-1 with two goal of Gervinho,who will wait his chance for play against Montepellier from the bench.

Podolski, who was also a scorer last weekend, should again operate in the attack, while recovered Diaby in the midfield will replace young Coquelin.Out of action are injured goalkeeper Fabianski, Sagna defender, midfielders Frimpong, Wilshere and Rosicky, while Walcott is doubtful.

Match Prediction : If we take into account only the current form of the two teams, of course, that Arsenal should routinely get the win, but in any case we must not forget the enthusiasm that exists at the French champion due to their first appearance in the Champions League, so this could be a very interesting match in which we expect an open game from both sides and a lot of goals.Over 2,5 goals.

Watch Montpellier vs Arsenal match live from our live stream sections.
Match highlights and full match video will be added after the match