The second semifinal match of the World Cup 2014 in Brazil will be no less interesting than the first. Similar situation because again we have one team from South America and one from Europe, and both of them have what it takes to win the title of world champion.

On the other hand, both selections somehow owe us so far and are generally they were not brilliant, especially Argentina, while the Dutch still have a high win over Spain and 2-0 against Chile from the third round of the group stage.

The last-16 stage and the quarterfinals both Netherlands and Argentina passed trough with a lot of luck and without convincing results. 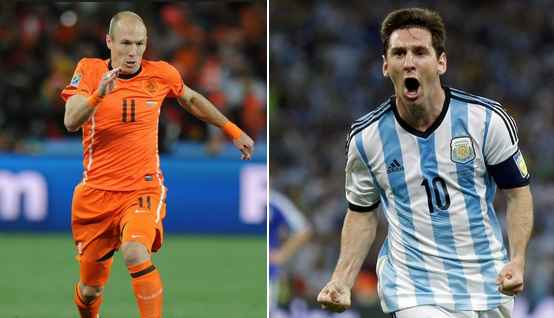 Four times have met at the World Championships the Oranje and the Los Gauchos, where the most important was the final match of World Cup 1978., when Argentina celebrated at home after extra time 3-1 and it was the only victory for the South American team, as four years before that was 4-0 for the Dutch, and the “Oranje” have celebrated in 1998 2-1, while in 2006. it was 0-0.

The Netherlands at least on paper, should have the easiest task in the quarterfinals, because they played against Costa Rica, but in the end the match has shown different thing and the Dutch had to “survive” the lottery of penalties, to reach the semifinals.

The Oranje had a ball possession, good attacks and really dominated most of the match, however, their realization was a problem.

On avarage they scored three goals in the first four games, but on the goal of Costa Rica was a great goalie Navas for whom the Oranje did not find a solution until the penalties.

Dutch statistical were much better, especially in finishing of the regular playing time when they could solve everything. Still, the Central American side had their chance to knock the Oranje at the finish.

The Dutch boss, van Gaal had to change the formation, de Jong was injured, so Verhaegh head to bench and Martins Indi jumped in. The Oranje played with three defenders only and Blind was something more offensive oriented. Robben as usually was superb, but Robin van Persie wasnt as he often was caught in a offside and probably made a world cup match record with the number of offsides he was in.

The crucial moment of the match happen a minute before the penalty shoot-out when van Gaal pulled out his first goalkeeper Cillssen and brought in Krul, who saved two penalties and secured the semi-finals for the Dutch. Still, Cillssen will start again from the first minute, while Lens could replace Depay or even Janmaat, if van Gaal decided to something more defensive approach.

In the last-16 and the quarterfinals match they enrolled two 1-0 wins, but the situation was not the same, as Switzerland made a lot of problems to the South American team, while Belgium surprisingly not. Against Belgium , Argentina over Higuain have taken a lead early and the 1-0 lead remained until the end. It was defensively the best match of the Los Gauchos.

Perhaps the reason for that was decision of Sabella to start with the experienced Demichelis instead of Fernandez, while forcefully on the left side was Basanta, as a replacement for suspended Rojo, who most likely would play from the start against Netherlands.

Biglia started instead of Gago and he played very good, and While Messi wasnt on his level , Higuain stepped in and scored a winner. The big handicap for Sabella is injury of Di Maria, so Maxi Rodriguez or Aguero who recovered from his injury could replace Real Madrid’s winger.

Match Prediction : Although bookies place Argentina as the favourite here, if Messi & company doesnt raise their game, the Oranje have what it takes to seal their World Cup finals place and that’s our prediction.