Here is and the big derby which is eagerly anticipated even before the start of the championships, and now seems to have gained additional charm and will be a lot more interesting. 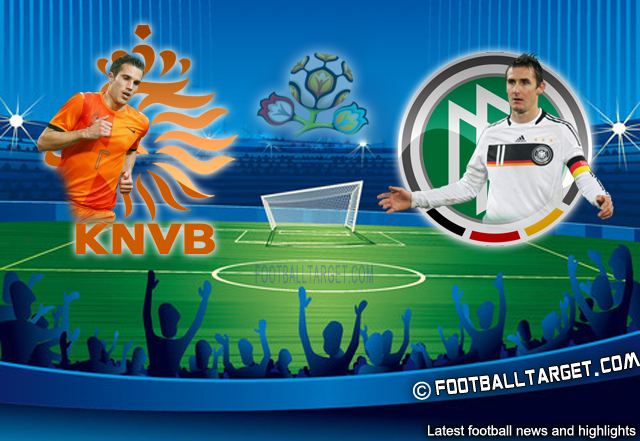 It was expected that at this point both selections have three points and that this match will decides, who will be the first in the group, but the Dutch surprisely lost from Denmark and currently have no points, while the Germans have not thrilled against Portugal, but they still have expected three points.

These two selections in the past played a huge number of matches , mostly friendlies, so it was and the last in that categoryin Hamburg,where Germans resolve it to their advantage with a convincing 3-0.

On the major competitions often surprises happen, and it was already in the first round, where it was just a question of who will be the “victim” in Poland and Ukraine.

Few people in the role of “victim” saw just the Netherlands, but it happened to them and now from a big favorite for the title, Dutch came into a situation for “rescue” against another great candidate for winning the trophy.

They can be comfort with a large number of opportunities which they created, but due of luck and to lack of attackers concentration they did not converte it into goals.

Selector van Marwijk against Denmark remained consistent with his philosophy of the game with a one attacker, so Huntelaar stayed on the bench and played of course Robin van Persie .

Arsenal striker has missed, and what normally he scores without any trouble, but it happens to the best. The midfield was solid, although from Robben and Sneijder was expected much more.

Neither defensive duo in that line of the team, van Bommel and De Jong were not brilliant, while the defense as expected had big problems. Mathijsen was out for this match, and it was replaced by Vlaar,solid, but for the match with Germans experienced stopper of Málaga though should appear in the team.

There could be few more changes in the team,and one of them could be van der Vaart instead of de Jong or van Bommel, but it is quite risky and offensive against very strong opponents.It hard to belive that van Marwijk change formation and play with two strikers in the team,where Afellay then should go to the bench.

After a first round match against Portugal, probably many people remeber Gary Lineker words “Football is a simple game; 22 men chase a ball for 90 minutes and at the end, the Germans always win.”.

One of the biggest favorites of the championships didn´t play so good, but they, unlike some other favorites, perhaps their next opponent, or Spain, have three points, and that is important.

For a long time has not been seen that one selection by statistics is so dominant against the Germans, as it has succeeded for Portugal and this is cerain something that Germans coach Low did not wanted at the opening of the championships.

but,we will leave aside the points and analyze the Germans game. The surprise part was at Mats Hummels as the central defender. How coach Low succed with player from Borussia, is best shown by the fact that he was the best player in the game.

Despite Cristiano Ronaldo in the opponent team, Boateng was right, and Lahm on the left side, and it was not bad, especially from Boateng. Germans midfield failed, and that was not expected.

Low obviously rushed only recoveredSchweinsteiger and it was a bad move, but the biggest disappointment though was Ozil.
Therefore the Germans very hardly created opportunities, and Gomez goal was achieved with a lot of luck.

Follows the Netherlands and the question is will Low change something . Perhaps should “cool down” Schweinsteiger, which means that Kroos jump in than. Ready for the bench is and T.Muller, although he will probably get another chance. Everything is much easier with three points on the account

Prediction : Dutch need to win this,thats clear,but against Germany it will not be so easy.We believe that the Dutch attack should “work” this time,and that they will manage to score a goal or two, because they can not repeat the failures from the first round. Neither the Germans will not remain unanswered, so all together there could be a lot of goals in this game.Over 2,5 goals.