Jose Mourinho is contemplating bringing unsettled striker Wayne Rooney to Stamford Bridge to help join the blues revolution under their former boss. However Fernando Torres may be shown the exit door if the England striker completes the switch from red to blue.

Despite David Moyes insisting that he would like to keep Rooney at Old Trafford and stating that he is not for sale, Chelsea are still confident they can get a deal done and are refusing to give up on their man. 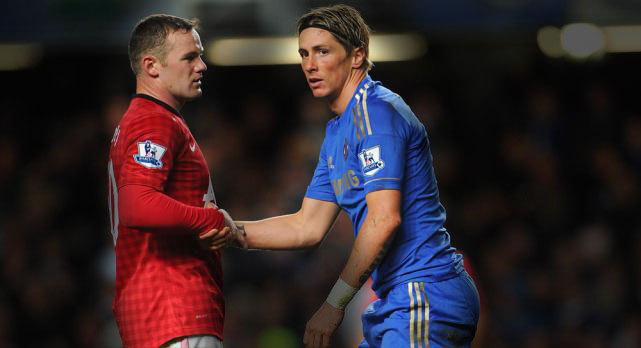 Rooney often found himself behind Robin Van Persie last season, and played most of the season out of position. He controversially made his desire to leave United public in 2010, before being offered a brand new 5 year contract in an attempt to keep him at the club. This contract is due to expire in 2015, so David Moyes may decide to cash in on the striker while his value is still high, if he can not get confirmation from Rooney that he is 100% behind the cause.

The 2011/2012 season was Rooney’s most prolific to date, scoring 27 Premier League goals in 34 appearances. But since the arrival of RVP, he has been a shadow of his former self, only finding the net 12 times in 26 appearances in the last campaign.

As for Torres, he has been linked with moves away from Stamford Bridge for some time now, however he is starting to find his feet in a Chelsea shirt, and their have been glimpses of his past form, but that is all they have been. With Chelsea still pursuing a number of strikers, including Rooney, it is believed that Torres’ will be moved on as Chelsea try to recoup some of the £50m they paid for the Spaniard from Liverpool in 2011.

Torres can count himself some what unlucky, the huge price tag came at a time when he was hitting a rough patch and had lost his confidence, which was further hit by his failure to score more than one goal during the 2010/2011 season for the blues.

Jose Mourinho may however choose to pair Rooney and Torres together, and instead opt to part company with Senegalese striker Demba Ba. Fenerbahce are said to be interested in the striker, along with several other clubs.

I think it is safe to say that one of either Torres or Ba will be leaving Stamford Bridge in the event that a world-class striker arrives, with Wayne Rooney firmly situated on Roman Abramovich’s wishlist.