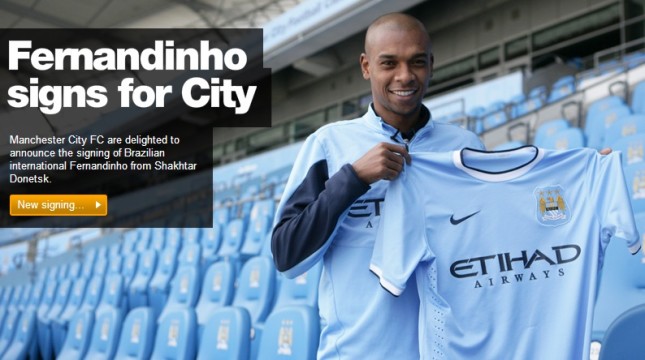 Apparently The 28-year-old Fernadinho has passed medical on Wednesday morning,and has signed a contract with Manchester City which the club on it´s offical website has confirmed.Fernandinho will wear the number 25 shirt and will join the Spaniard Jesus Navas who was the first signing of Citizens.The transfer is worth arround €40 million.

Fernandinho said : “This is a change, a challenge and a chance that I have been waiting a long time for. Playing in the Premier League for City is like a dream.

“My ambition here is to win all the titles, the team here is strong, and so is the greatness of the club and the supporters. Professionally this is a spectacular thing. Playing for a huge club in a huge league makes me so happy. I hope I will be able to repay City for what they have done for me.

“I know I will face challenges but I am prepared for them. Every player at a high level faces pressure and must respond and I am ready for that too. I know a lot about City. Ever since they expressed an interest in me, I have been learning more”.